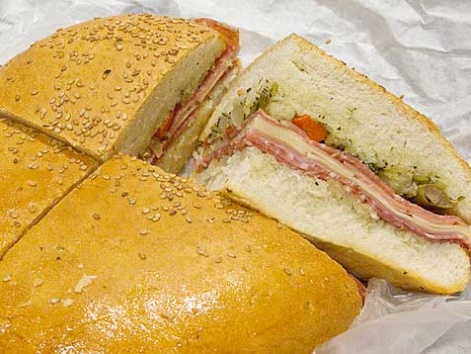 A prime example of the Sicilian influence in New Orleans, the muffuletta is a football-size sandwich consists of soft, round Italian bread (itself called muffuletta) loaded with Italian meats and cheeses and, essentially, spread with a spicy, salty, garlicky Italian olive salad. It is usually some combo of Genoa salami, ham, mortadella, pastrami, Swiss, and provolone. It is widely accepted that the Sicilian owner of NOLA’s Central Grocery devised this sandwich in 1906.

Though the first migration predated the Civil War, thousands of Sicilians arrived to NOLA in the 1880s, escaping a corrupt and dangerous homeland. The lower French Quarter eventually came to be known as "Little Palermo." Today, while a Sicilian community remains, the easiest way to experience this legacy is via dishes like stuffed artichokes and muffulettas that have come to be associated with this city.

Where: Old-school Italian market Central Grocery (504-523-1620; 923 Decatur St., map) remains the definitive place to buy your muffuletta, which is served quartered, at room temperature, and wrapped in paper. Some people like to eat it at the informal tables in CG, while others take it outdoors to Jackson Square or the banks of the Mississippi. The sandwich is gigantic—if you pace yourself, you can do both!

When: Tues-Sat, 9am-5pm. Your chance of avoiding a long line is better before noon.

Order: Get your muffuletta ($15.91 for whole) and peruse the shelves: Central Grocery sells some great foodstuffs, including its famous olive salad, but the prices are rather touristy-steep (i.e., get your hot sauces and coffee at a regular grocery store). At least buy some Zapp’s potato chips to accompany your sandwich.

Good to know: Everyone will tell you that CG muffulettas travel well, and in fact they are ideal for picking up the day of your return flight to enjoy on the plane, in the airport, or later at home. By the next day, however, the bread starts to harden around the edges—still tasty, but not as tasty (heating it up at that point isn’t a bad idea). Some people have had luck freezing them.

Alternatively: Napoleon House (500 Chartres St., map) does a good muffuletta ($15.95 for whole), though it is served hot unless you request it otherwise. Try a quarter ($4.25) and see how you like it—we enjoyed the melted cheese, but personally found that cold is better (don’t forget to try a Pimm's Cup cocktail while you’re there). For an artisanal twist on this classic, try the $12 muffuletta at Cochon Butcher (930 Tchoupitoulas St., map), with house-cured meats and olive salad.