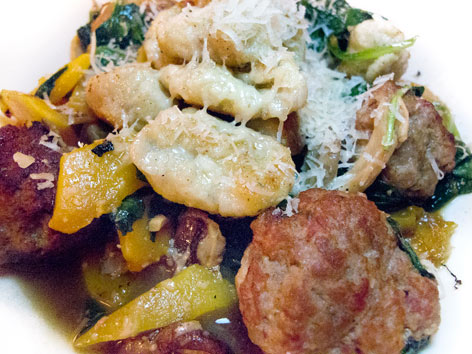 What: A plethora of New England farms and regional seafood means it isn’t hard to eat local in the Boston area—though we say “area” because it does seem that the university town of Cambridge, just across the Charles River from Boston, has the lion’s share of good locavore restaurants. Must be thanks to all those Harvard (and MIT) smarty-pants…

Where: We like Cambridge Brewing Company (1 Kendall Square, Bldg 100, map), a lively restaurant and microbrewery that often gets props for its good house-brewed beer, but happens to have great locally sourced food as well. It dates to 1989, when these kind of multitasking places were relatively new on the nation’s scene. Seasonal and moderately priced, CBC’s “creative American” menu—which frequently states what food comes from what area farm—moves easily from cheese plates to shellfish to pizza, and the staff will suggest beer pairings if you’re interested. There’s a sweet outdoor patio to boot.

Order: The menu changes seasonally, and there are daily specials, so it’s likely that what’s pictured—the excellent all-natural pork meatballs, with local squash, mushrooms, spinach, and house-made gnocchi, cooked with the brewery’s own Pumpkin Ale ($17)—is no longer on offer. Same goes with the delicious beet salad, with local greens and cheese (during our visit; $9), and the organic house-made pork sausage, locally sourced and served with collard greens, beer mustard, pickled onion, and hop-infused hot sauce ($9)—even if not this one, there will usually be some sort of yummy local sausage on the menu. You might also come across fried Point Judith (RI) calamari, Block Island swordfish, Wellfleet littlenecks, roasted Long Island duck breast, and much more. Try a sampler of the brewery’s beers to find what you like best.

Alternatively: One of Boston’s best restaurants is also among its most locavore-centric: Craigie on Main (853 Main St., Cambridge, map), the French-inspired, nose-to-tail, seasonal restaurant helmed by James Beard Award-winning chef Tony Maws. Reserve ahead of time and expect to pay a pretty penny; the prix fixes and tasting menus probably offer the most value. Also in Cambridge is the highly lauded Oleana (134 Hampshire St., map), featuring a seasonal, Eastern Mediterranean menu. Back in the city of Boston, you might try the South End’s Toro (1704 Washington St., map), a Barcelona-style tapas restaurant that does a good mix of authentic Spanish (jamón serrano, Idiazabal cheese, the entire wine list) and locally sourced, sustainable ingredients (Island Creek oysters, local smoked beef tongue).