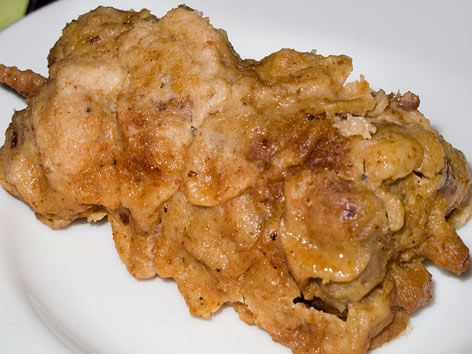 What: A mysterious dish with mysterious origins, city chicken is actually not chicken. Ever. Rather it is cubes of meat on a skewer—often pork and veal—that are usually breaded or battered and then baked or fried. It’s believed to have originated as a Depression-era working-class dish, back when pork was cheaper than chicken, in the working-class cities of the Northeast and Midwest: Pittsburgh, Scranton, Cleveland, Binghamton, Cincinnati, and Hamtramck, MI, which is otherwise known as the Detroit area’s Polish enclave. In Hamtramck, you’ll find city chicken in Polish restaurants and groceries—it’s long been popular among Polish-Americans there, but the dish itself is not actually Polish.

Order: The city chicken plate ($11.75), which comes with two skewers of city chicken, plus the usual accompaniments of mashed potato, sauerkraut, and vegetable and a choice of soup/salad starters. (You can also opt for one skewer à la carte for $3, pictured, which makes a great addition to the Polish plate.) The “chicken” is really tasty here: chunks of tender, seasoned pork and veal threaded onto a wooden stick, then dredged in flour, coated in egg wash, dipped in bread crumbs, pan-fried and baked. Also don’t miss the great Polish foods and drinks here, of course, or the pan-fried lake perch on Fridays.

Alternatively: City chicken is on the menu at the area’s other great Polish restaurants, including Polonia (2934 Yemans St., map), also in Hamtramck.