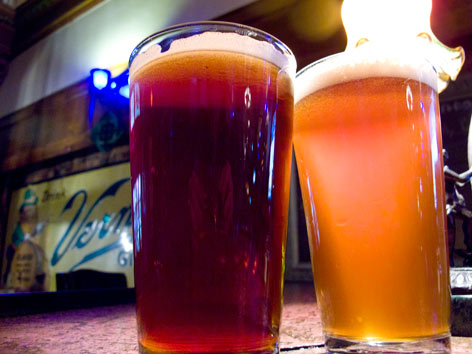 What: Detroit is yet another American city that had and then lost a big brewing industry, bidding farewell to its last big brand, Stroh’s, in 1985. Thankfully, a slew of new craft brewers has risen to reassert Detroit as a beer town in a beer state: The brewpubs and breweries of downtown Detroit (see below) and its suburbs are further anchored by a plethora of regional Michigan brewers, such as Bells, Michigan Brewing Co. (home to Kid Rock’s Badass American Lager), Arbor, Founders, New Holland, and more.

Where: We like to mix it up with local breweries and standout beer bars, and of the latter, Foran’s Grand Trunk Pub (612 Woodward Ave., map)—formerly the ticket office of the Grand Trunk Railway (1908)—was too good to pass up: The locavore-friendly Irish pub taps Michigan craft beers exclusively, with others available in bottles.

Order: Taps are rotated, but the focus is on Michigan craft brews here. Of the Metro Detroit breweries, you might find some offerings from downtown’s Motor City Brewing Works—the Nut Brown and easy-drinking Ghetto Blaster, during our visit—as well as MilKing It! Productions, a young brewery out of Royal Oak, a Detroit suburb (pictured, from left, is its excellent Brik Irish Red ale and Axl Pale ale). There are also plenty of other Michigan beers to try, from Short’s nutty Bellaire Brown to the crazy-intense whiskey-barrel-aged Shipwreck Porter from Arcadia. Ask your bartender for a taste when in doubt.

Good to know: Non-drinkers can try a bottle of classic Faygo here, one of the many Detroit-sourced products on the pub’s extensive food and beverage menus (see also: Grocery store goodies: Faygo, Better Made chips).

Downtown breweries & brewpubs: We really liked Detroit Beer Co (1529 Broadway, map) for its friendly vibe, handy downtown location, and, of course, great beer, which you can sample in flights (though you can’t go wrong with a pint of the clean and hoppy Detroit Red). Also downtown is Motor City Brewing Works (470 W. Canfield St., map), specializing in beer and pizza, and, conveniently across the street, Traffic Jam & Snug Restaurant (511 W. Canfield St., map), the state’s first brewpub when it was established in 1992. Finally, there’s Atwater Block Brewery (237 Joseph Campau St., map) in the historic Rivertown warehouse district, which has opened and closed as a big brewery and restaurant over the years and now lives as a simple brewpub specializing in German-style beers—basically, a tap room inside the brewery space (open Mon-Fri, 5pm-10pm; Sat, 2pm-11pm; Sun, noon-8pm). There's also Atwater in the Park (1175 Lakepointe St., map), the brewery’s outpost in Grosse Pointe Park that includes a taphouse inside a renovated old church and an outdoor biergarten.

Good to know: Make the most of Detroit’s beers with Motor City Brew Tours. It offers a variety of guided bus, walking, and bike tours, starting around $65, as well as beer-themed events.