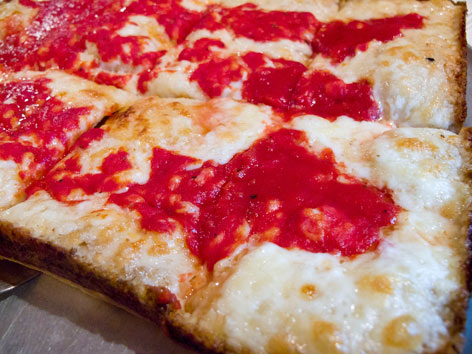 What: Detroit is one of several American cities claiming its own style of pizza: square and Sicilian-esque, cheesy and splashed with tomato sauce on top, with a thick, crispy exterior crust and doughy insides—a rather addicting contrast of textures. Outside the state it’s been largely overlooked (or unheard of, rather), but it turns out Detroit-style pizza is, in fact, gaining recognition around the country. Stay ahead of the curve and try it here, at the source.

Where: You can’t go wrong with Buddy’s Pizza (multiple locations including the original, 17125 Conant St., Hamtramck, map), established in 1936 and serving square pies since 1946. It’s credited with igniting the Detroit square-pizza trend, and has received big props from everyone from the Food Network to American pizza connoisseurs like GQ’s Alan Richman. Like most Detroit-style pizzerias, Buddy’s doesn’t use mozzarella cheese but a “secret blend” that includes Wisconsin brick cheese.

Order: A four- or eight-square cheese pizza ($8.49-$14.49). That’s it, unless you want to add a salad. Plain is the way to go to get the full Buddy’s experience: that crunchy exterior crust (which includes caramelized cheese here), the pillowy dough and salty cheese, the slightly sweet, bright-red tomato sauce. If you can’t bear to skip the toppings, be forewarned that they tuck their pepperoni under the cheese to purposefully avoid the charring that we happen to love (see also: Buffalo-style pizza). Many locals prefer to pair their pie with an antipasto salad.

Good to know: Buddy’s has a gluten-free pizza menu, and offers lactose-free veggie cheese as well.

Alternatively: Among the other Detroit pizza heavyweights in the Metro area are Shield’s (multiple locations including 25101 Telegraph Rd., Southfield, map)—which famously fled the city for the suburbs in the 1980s, but plans to return to downtown soon—and, in Hazel Park, Loui’s (23141 Dequindre Rd., map), where the sauce and cheese are more blended and crusts more charred. If you want to compare old-school and new-school Detroit pizza, try the much-lauded thin-crust pies at Supino (2457 Russell St., map) in Eastern Market, where pies are offered “red” or “white” and can be topped with fresh, locally sourced (when possible) ingredients, such as roasted sweet potato, a sunny-side up egg, Porktown sausage, speck, and smoked Gouda (er, not necessarily all together).