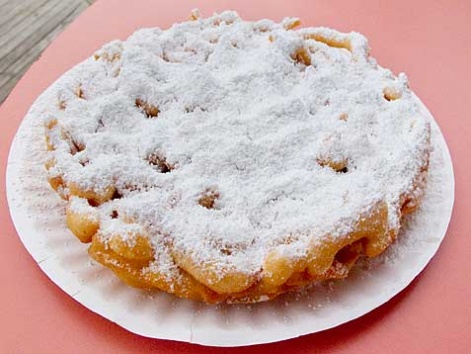 What: Batter is swirled around (traditionally via a funnel) into a hot vat of oil, creating a latticework of deep-fried dough that’s then heaped with powdered sugar to make this super sweet boardwalk treat. Funnel cakes are attributed originally to the Pennsylvania Dutch (though their concept dates back centuries to the Middle East), but they—and their smaller, plumper kin, zeppoles (fried fritters with powdered sugar, hailing from southern Italy)—have long been immortalized on the boardwalks of New Jersey.

Where: We’re not picky here: We like any funnel cake on any boardwalk. Our photo is from Seaside’s Original Steakhouse & Clam Bar, on the Seaside boardwalk (at Dupont Ave.), which, despite its uninspired name, has been around since 1929. Though the funnel cake was nearly unrecognizable under all the sugar, we can assure you it was unreasonably delicious.

When: Funnel cakes are seasonal, so whenever the boardwalks are up and running. (We imagine eating a funnel cake in winter wouldn’t be much fun anyway.)

Order: A funnel cake ($5). Wash it down with a cold lemonade, often served at the same boardwalk stands.