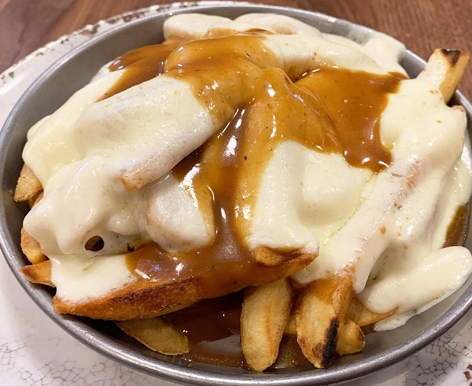 Disco might be dead, but not in the diners of North Jersey, where disco fries have long reigned. This late-night comfort food is a very Jersey spin on the poutine of Québec, Canada: Steak-cut French fries are crisped up and smothered in copious amounts of savory brown gravy and mozzarella cheese. Since the late 1970s when this dish first earned its name, legions of clubgoers, late-night bar hoppers, and designated drivers have headed to their favorite diner for 3am bacon and eggs, grilled cheese, and this sobering dish.

Good to know: While diners across New Jersey serve this dish, like many of the Garden State’s culinary gems (see the Taylor ham vs. pork roll debate), there is a divide between the north (including the northern Jersey Shore) and south. People from North Jersey continue to call this dish disco fries whereas elsewhere in the state it’s simply known by its ingredients: the inherently less interesting “French fries with cheese and gravy.”

Where: In Clifton, the 24/7 Tick Tock Diner (281 Allwood Rd., directly accessible from Rt 3 West, map) is a New Jersey legend, dating to 1948 and conveniently located on a major thoroughfare connecting Manhattan to suburbia. The exterior was completely renovated in 2019, giving it a revamped retro look with a stainless-steel façade and plenty of neon lights. It also has a sister diner in Manhattan.

Order: The menu is a typical “phone book”-size Jersey diner menu, but make sure you start with the disco fries ($9.45), which are served in a round skillet and piled high with cheese and brown gravy.

Good to know: It’s also worth trying disco fries with American cheese instead of mozzarella! This writer actually prefers the way that cheese coats each individual fry and melts to a golden-brown. If you ask for this substitution, do it with confidence and be prepared to ignore any stares and glares you might get from nearby disco fry purists.

Alternatively: In East Newark, the family-owned Tops Diner (500 Passaic Ave., map), established in 1942, frequently lands at the top of “Best Diners” lists, not only in the state but across the country. Tops Diner has likewise just undergone an awesome ($11M!) renovation resulting in a huge interior and a quintessential steel-and-neon look with an impressive tower and the TOPS name spelled out in lights. At the time of writing (Oct. 2021), it’s reopened for takeout and delivery only, with indoor dining coming soon.

The menu features $10 “golden fries stacked really high, layered with mozzarella and original 1942 brown gravy.” For another take on French fries, from Peru, check out its house special, lomo saltado, a traditional stir fry with strips of steak and onions tossed in a peppery brown sauce —Contributed by Adam Horvath (Foodigenous)