Rising up on my toes at the age of three to catch a glimpse of what was causing such happy commotion at the dinner table is my earliest memory of the samosa. Being an only child in the group, I was disadvantaged.... Read more

<< back to foods in Asheville 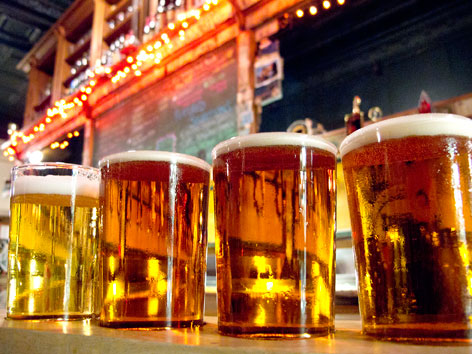 What: It’s not for nothing that Asheville has been voted Beer City U.S.A. for four consecutive years (2009-2012). For a small town, Asheville has an overwhelming amount of locally brewed beers—and, equally important, a large local population very enthusiastic about drinking them. At last count there were 18 craft breweries in town, including brewpubs (see below). Distributing breweries include Highland Brewing Company, the first brewery to be established here, in 1994—we’re fans of its crisp St. Terese’s Pale Ale and silky Oatmeal Porter, but it does some interesting seasonals and one-offs as well—and French Broad Brewery, doing traditional European-style beers, including the popular Wee Heavy-er Scotch Style Ale. Then there’s the highly rated Wedge Brewing, beloved for its raspberry-spiked Imperial Stout and fruity, complex Dubbel-style Abbey Ale, among others, in the River Arts District; Green Man Brewing—look for the interesting coconut porter and robust Dweller stout—and Pisgah Brewing Co., doing organic beers, including a terrific IPA, 12 miles outside of town in Black Mountain. Among the newer handful of breweries are Burial Beer Co., specializing in Belgian farmhouse ales, German lagers, and creative American styles; the circus-themed Hi-Wire Brewing; and the fast-growing Wicked Weed Brewing, a two-story brewery-bar-restaurant celebrated for its bold, exciting flavors (Coconut Curry Wit and Apple Pie Saison, anyone?). The bottom line: You’ll drink well here.

Good to know: Asheville’s brewing scene got a big outside boost in 2012, when plans were announced that not one but three major craft breweries—among them the country’s second- and third-biggest—announced plans to build expansion breweries in or just outside Asheville. In the next two years, Sierra Nevada Brewing (of Chico, CA), New Belgium Brewing (of Fort Collins, CO), and Oskar Blues Brewing (of Longmont, CO) will be joining the Asheville brewing party.

Where: A longtime stalwart of Asheville’s beer-drinking scene, Barley’s Taproom & Pizzeria (42 Biltmore Ave., map), opened in 1994, boasts two floors of taproom, a pizzeria, and frequent live music, but we’re most concerned with the former: Between the 24 taps downstairs and the 19 upstairs, you won’t get bored of beer here. While there is a nice focus on North Carolina breweries, you’ll also find great craft beers from around the U.S., plus a select few from abroad. (If you’re into it, there’s also local mead on offer.) Some local trivia: The owners of Barley’s are also the founders of the city’s wildly popular Brewgrass festival, an annual celebration of craft beer and bluegrass established in 1996 and held every fall.

Order: We recommend getting a flight to try a few local brews at once. Pictured is the (no longer available) French Broad flight ($4), offering a five-ounce sample of that fine local brewery’s 13 Rebels ESB, seasonal Zepptemberfest, Gateway Kolsch, and IPA, our favorite of the bunch. But there’s also a “Beer City flight,” honoring Asheville’s ongoing national-beer status and featuring four different WNC brews, as well as a $6 build-your-own flight.

Good to know: In addition to the Asheville-area breweries, there’s a host of other North Carolina breweries that distribute here—if you’re a visitor to the state, most of these will also be new to you. Keep your eyes peeled for Catawba Valley (of nearby Morganton), Foothills Brewery (Winston-Salem), Big Boss and LoneRider (both Raleigh), and Duck Rabbit (Farmville), to name a few.

Alternatively: This city takes a lot of pride in its brewing scene, so you really can’t walk into a bar or restaurant without encountering a few local beers. That is, if the place isn’t making its own beers to begin with. Check out these brewpubs and beer bars:

Good beer bars: There are many, but besides Barley’s we loved Thirsty Monk (two locations including 92 Patton Ave., map)—the downtown location has U.S. craft beers, including many locals, upstairs and Belgian beers downstairs, plus food (see also: mountain trout), while Monk South has an in-house brewery. Popular Mellow Mushroom (50 Broadway St., map) is part of an 18-state chain, but keeps it local with tons of Asheville and North Carolina craft beers on tap.

Are you thirsty yet? If we missed your favorite Asheville watering hole for local beer, leave a comment and tell us!