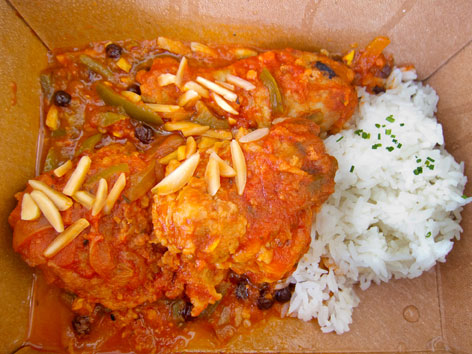 What: Country captain, a fragrant stewed chicken dish with a curried tomato sauce served over rice with currants and almonds, stands out among Charleston’s traditional dishes, for both its flavor and its remarkable, well-traveled history. Its ingredients hint at its birth in a faraway land (India), while its name, referencing those ships’ captains who traded in spices abroad, provides a potential vehicle for reaching Charleston, a major port city. It’s no surprise, then, that one popular legend neatly credits the journey to an English sea captain who’d served the dish in India and introduced it to locals in either Charleston or Savannah, another port city 100 miles to the south.

But country captain’s exact route to the American South is, in fact, far more complicated, as Serious Eats brilliantly details here: From India it was likely served on trade vessels before turning up in American cookbooks and in New York City (at the inventive Delmonico’s) in the early 20th century; then it gained popularity in social circles down in Columbus, Georgia, with the newfound addition of tomato sauce (around this time, the dish became a favorite of future president Franklin Delano Roosevelt and General George S. Patton, who requested it on visits to nearby Fort Benning). From there the “exotic” dish was adopted by Army wives (and their African-American cooks) and over time made its way into the canon of “Southern classics,” albeit those with ties specifically to Georgia.

So why is country captain often cited today as a regional Charleston dish? Probably reflecting its popularity among home cooks in the Charleston area at the time, the dish’s recipe wound up in the beloved 1950-published Charleston Receipts Junior Leagues cookbook, the tome that’s essentially the Bible of regional Charleston cuisine. Luckily for Charleston, it’s delicious.

Where: Country captain is not easy to find in Charleston restaurants today, but James Beard Award-winning chef-owner Robert Stehling has long kept it on the menu at his wonderful Hominy Grill (207 Rutledge Ave., map), housed in a restored 19th-century barbershop.

Eds. note: Sadly, this restaurant closed in April 2019. Has anyone else found this dish in Charleston?

Order: One of the restaurant’s “Charleston classics,” the country captain here smothers sautéed bone-in chicken breast in a tomato curry sauce with green bell peppers, currants, and toasted, slivered almonds, served over jasmine rice ($18). (Ours is pictured in a to-go container.) It’s a wonderfully flavorful, saucy dish, just subtly curried— a nice change of pace from all the seafood and heavier fried dishes in the area.

Alternatively: We have not found this dish on any other menus in Charleston. If you know of a place, please let us know in the comments below!