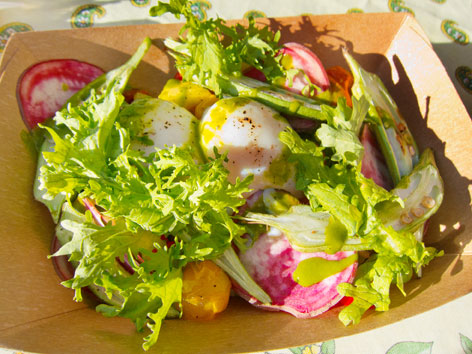 What: Bravo, Charleston: It’s not too hard to find restaurants that are committed to sourcing ingredients locally here. The Lowcountry has a bounty of local seafood and seasonal produce, and passionate chefs are making good use of it—some more than others, of course. Of particular note are a few spots like FIG (a.k.a. Food Is Good), Slightly North of Broad (a.k.a. S.N.O.B.), McGrady’s, and Husk that put their farm-to-table sourcing philosophy front and center. James Beard Award-winning chef  Sean Brock of the latter two restaurants famously goes the extra mile by turning to history, learning about what used to be produced here, and attempting to re-create that by advocating for seed preservation, planting and raising heirloom products on his Wadmalaw Island farm, and, well, doing a good deal of research.  But to eat a great local meal in Charleston, you need not reserve a table at one of the city’s best restaurants (though we do recommend that as well; see at bottom). You can just go to the farmers market.

Where: We found brunch food truck Outta My Huevos at the excellent Saturdays-only Marion Square farmers market (map), on a tip from our server at FIG. And we can confirm that there is nothing you would rather eat on a Saturday morning than one of its locavore-friendly egg dishes.

When: Sat, 8am-2pm, April-Nov. (see Twitter feed for location/hours on other days)

Order: Pictured is the excellent “warm local vegetable salad” ($12), a gorgeous plate of locally sourced veggies that vary with the season—they might include yellow squash, zucchini, heirloom tomatoes, charred burgundy okra, beets, cubanelle peppers, baby mustard greens—mixed with Carolina Gold rice and topped with chimichurri sauce and two slow-cooked, farm-fresh eggs. It’s a heavenly plate of healthy local deliciousness. The truck’s “scratch-made English muffin” egg sandwich looks great, too, and be sure to get a side of cheesy Geechie Boy Mills cheddar grits.

Alternatively: Anyone remotely interested in sustainable, seasonal, historic Southern cuisine—or just damn good food—owes it to themselves to dine at Husk (76 Queen St., map), where regional meats (Benton’s ham, North Carolina duck, South Carolina quail) mingle with Lowcountry ingredients (benne seeds, okra, field peas, Carolina Gold rice, Geechie Boy grits) and heirloom varieties of pork, beans, tomatoes, and more on the daily-changing menu. Make a reservation and plan for a drink at the restaurant’s bar, which is housed in a beautifully renovated freestanding building next door and similarly honors the area’s traditional spirits, historic punches, and classic cocktails. Helmed by another James Beard Award-winning chef-owner with a longstanding commitment to local purveyors, Mike Lata, FIG (232 Meeting St., map) has been a Charleston farm-to-table favorite since its 2003 opening; start with its signature super-smooth Keegan-Filion farm chicken liver paté, slow-cooked with cream and pork fatback. (Lata’s other highly regarded restaurant, The Ordinary, shifts the focus to regional fishermen, crabbers, and oystermen.) Lowcountry bistro Slightly North of Broad (a.k.a. S.N.O.B.; 192 East Bay St., map) lists farms on its menu, and even profiles purveyors on its website, while Hominy Grill (207 Rutledge Ave., map), whose praises we’ve sung elsewhere on this site, pays homage to classic Charleston dishes in part by sourcing from small local farmers, fishermen, and millers; look for triggerfish and wreckfish, tasty local species once considered bycatch, to occasionally appear on its daily-specials menu (it was Lata of FIG, actually, who first served triggerfish in a Charleston restaurant, in the 1990s at Anson (another great locavore restaurant, sadly closed for now due to fire damage); Brock now uses these fish on his menus, too). Circa 1886 (149 Wentworth St., map), located in the original 1886-built carriage house of the historic Wentworth Mansion, and Two Boroughs Larder (186 Coming St., map) are two more great farm-to-table bets.