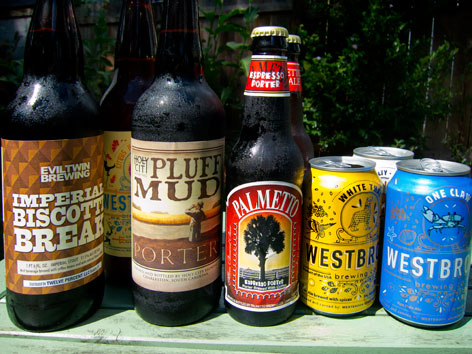 What: In keeping with much of smaller-town U.S.A., the Charleston area has a rapidly growing craft beer scene, so much so that it warrants more than one of its very own website. Among the bigger players are downtown’s Palmetto Brewing Company, the oldest beer maker in South Carolina (est. 1993); the widely distributing, innovative Westbrook Brewing, based in Mount Pleasant and known for its ongoing collaborations with Danish gypsy brewer Evil Twin (which often uses Westbrook’s facilities to brew its own out-there products); Holy City Brewing Company, where Lowcountry ingredients and inspiration often come into play (e.g., Bowens Island oyster stout, Slanted Porch pale ale); the family-owned, green-minded Coast Brewing, doing mostly organic beers; and the young Frothy Beard Brewing Company, focusing on experimental, small-batch beers (and paying tribute, perhaps, to the proliferation of bearded brewers in this town). And then there are several other breweries, beer bars, and beer stores, and more than that by the next time you read this. Here’s a brief rundown of where to drink beer and what to look for in Charleston.

Where: To really hit a few birds with one stone—on your own time—head to the small but jam-packed Charleston Beer Exchange (14 Exchange St., map), the state’s first all-craft-beer shop. That’s where we stocked up our fridge for our stay in Charleston. The store has a few taps for growlers (and samples), too.

Order: Enlist the help of the knowledgeable staff here, who will direct you toward the most local of beers and describe what’s what—and what’s a must-try for any visitor. On that list during our stay were (from left) Evil Twin’s boozy (11.5% ABV!) Imperial Biscotti Break, brewed at Westbrook; Westbrook’s Citrus Ninja Exchange, a hoppy, grapefruity collaboration with The Charleston Beer Exchange; Holy City’s roasty, earthy Pluff Mud Porter (which took home a gold medal at 2012’s Great American Beer Festival); Palmetto’s robust, flavorful Espresso Porter and easy-drinking Pale Ale; and a handful of interesting Westbrook cans: White Thai (a spicy, citrusy riff on a Belgian witbier with lemongrass, ginger, and Sorachi Ace hops), One Claw (a malty, hoppy rye pale ale), and the sour-salty Gose (“gose-uh”), the brewery’s take on gose, a “nearly extinct” traditional German-style sour wheat beer brewed with coriander and salt. We also enjoyed (not pictured) the crisp, clean 32/50 Kölsch from Coast.

Alternatively: Visit a brewery, many of which have tasting rooms; a brew pub; or a beer bar.

Breweries: Not an exhaustive list, but here’s how and when to visit a brewery during its tasting hours.

As in Asheville, Nashville, Denver, and other cities, you can knock out a few breweries in one go—safely, with a designated driver—by booking a tour with Brews Cruise ($57/person).

Brew pubs and beer bars: Among the brew pubs and bars on our radar is the excellent Craftsmen Kitchen & Tap House (12 Cumberland St., map), with 48 beers on tap, including a nice selection of locals, and 8 oz. pours for $3 or $4—a great way to try a handful of brews—and the new-in-2014 Edmund’s Oast (1081 Morrison Dr., map), a seasonally focused restaurant (from a FIG-alum chef) that includes an onsite brewery with some pretty interesting creations, like a Peanut Butter & Jelly beer, plus 42 taps, from the owners of The Charleston Beer Exchange. Then there’s Southend Brewery and Smokehouse (161 East Bay St., map), another brewpub, and Closed For Business (453 King St., map), an excellent choice for beer sampling, with 42 taps plus regionally sourced Southern pub-food favorites.