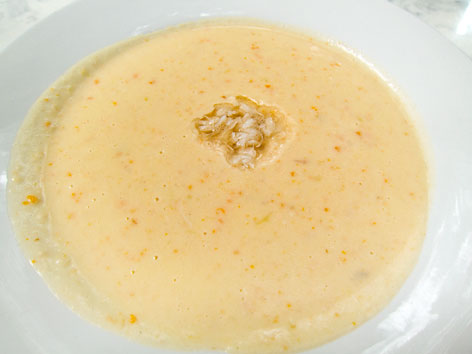 What: This rich, creamy, bisque-like blue-crab soup is on nearly every Lowcountry menu, which is not a bad thing: It is slurp-worthy decadence in a bowl. Its name comes from the star ingredient, female crabs, whose orange roe are swirled into the soup, giving it its color—which is not to detract from the rest of its delicious components, including lump crab meat, butter, cream, and sherry. One local origin story is that the butler of onetime Charleston mayor R. Goodwyn Rhett “invented” the dish when he gussied up the family’s usual crab soup with crab roe circa 1910, when the Rhetts were entertaining an important guest: then president William Howard Taft. But it’s also possible the soup simply came about as a winter specialty, a time of year when female crabs are easier to catch than males, which hibernate. Blue crabs have traditionally been plentiful in coastal Carolina, and no dish makes better use of them than this one.

Where: Our she-crab soup is from 82 Queen (82 Queen St., map), an elegant restaurant with a festive, leafy garden out back. The restaurant has won a few awards for this dish, and we weren’t disappointed.

Order: A bowl of the she-crab soup ($7/cup; $9/bowl). Not a cup, a bowl. It’s just too divine a rendition here, presented with crab meat and sherry poised atop a pool of rich, silky, roe-speckled soup. Mix it all up for a soup that’s creamy, a little sweet, rich with crab meat and flavor—and absolutely scrumptious mopped up with the to-die-for hot biscuits brought to the table (seriously, save room for a second complimentary round of those). Follow it with more crab, if you like—why not?—as there are very good Carolina crab cakes on the menu, or else try another Southern specialty, like BBQ shrimp and grits or pork shoulder.

Alternatively: It seems you can’t walk 10 paces in Charleston without stumbling upon some she-crab soup. Another rendition we’ve heard praised around town include the one at Hank’s Seafood Restaurant (10 Hayne St., map).