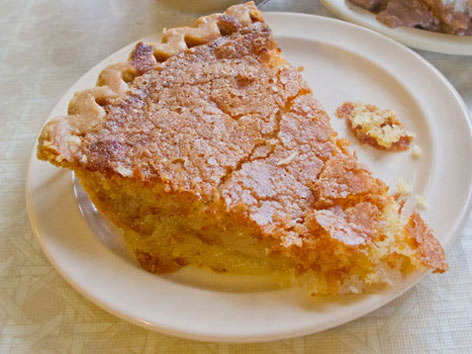 What: It’s not clear where, exactly, chess pie was “invented”—likely out of some resourceful cook’s scarcely stocked plantation kitchen—but one thing is for sure: This insanely sweet, egg-rich pie is Southern through and through. It’s a staple in kitchens and restaurants around Tennessee. The origin of its name is likewise murky, with some claiming it stems from a cheeseless cheesecake—with “chess” being an American corruption of the English term “cheese”—and others saying it comes, rather humbly, from the phrase “just pie” (or “jes pie,” in Southern drawl). In any case, the simple trinity of eggs, sugar, and butter forms the essence of this pie (lemon juice and vinegar are often included too), with chocolate, brown sugar, vanilla, or pecan added from time to time to vary things up. This is for serious sweet tooths only.

Where: At Sylvan Park restaurant (615-292-9275; multiple locations including 2209 Abbott Martin Rd., map), chess pie is usually on the menu of hearty Southern classics, and the hospitable, mostly female staff won’t hesitate to insist you try it if you never have. Here the pie is impossibly rich and sweet, with a brittle crust and super moist innards.

Order: Why, the chess pie, of course! But preface that with one of Sylvan Park’s wonderful meat-and-threes. And you should probably try a slice of meringue pie too—chocolate or coconut cream. (And then get rolled out the door.)