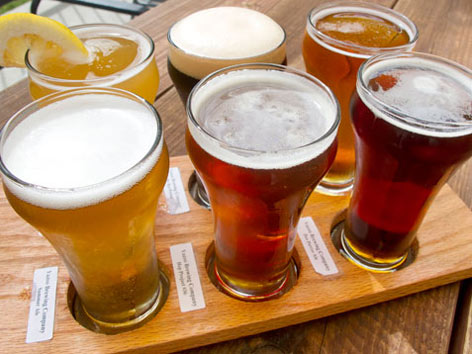 What: Nashville has a small but strong craft brewing scene, with a growing number of breweries and solid brewpubs in town.

Where: Established in 2003 by Linus Hall, who interned under veteran brewmaster Garrett Oliver of Brooklyn Brewery, Yazoo Brewing Company (910 Division St., map) is at the heart of Nashville craft brewing—these are the beers you’ll see all over town. Luckily, it has just the snazzy new taproom for the job, having relocated to its current location in the Gulch in early 2010: modern, glass-fronted, and warehouse-like, with lots of interior space, a sweet patio, and 18 taps pouring six different Yazoo beers. We love how seamlessly integrated the taproom is with the community—within walking distance of downtown, it’s just another cool neighborhood bar, albeit one with limited hours and good craft beers (plus locally sourced cheese plates and other yummy snacks).

When: The taproom is open Wed-Fri, 4pm-8pm, and Sat, noon-6pm. Brewery tours are available Wed-Fri at 5pm & 6pm, as well as Sat from noon-5pm, leaving every 30 min ($8; includes samples and a Yazoo pint glass). Booking is recommended.

Order: Sample the goods before you order a pint ($4): Six five-ounce pours run $11 here. Our favorites were the smooth, chocolatey, easy-drinking Sly Rye Porter and Hop Project, the brewery’s ever-changing version of an IPA in which every batch is brewed with a different hop blend—chances are, you won’t get the same beer twice. Its Gerst amber ale, interestingly, is a tribute to the Gerst Brewery, Nashville’s original brewery, which never recovered post-Prohibition (the beer is brewed in conjunction with Gerst Haus German restaurant).

Good to know: At Bravo Gelato, you can try some of Yazoo’s beers reinterpreted via gelato—past flavors have included banana-Hefeweizen and cherry-porter.

Brewpubs: Nashville has a few notable brewpubs making their own handcrafted beers, including Blackstone Restaurant & Brewery (1918 West End Ave., map), where an alleged killer burger joins the award-winning brews. You can visit three of the city’s breweries with Nashville Brews Cruise: $55 per person buys 3.5 hours of personalized tours and tastings—while they do the driving (on a bus).

Also good to know: One of Yazoo’s most interesting and popular beers, Sue—a high-alcohol full-bodied porter made with cherrywood-smoked barley malt (yep, smoked)—is not available at the taproom. Look for it around town; in the past it has been carried by 12 South (see above) and The Flying Saucer (111 10th Ave. South #310, map) downtown.