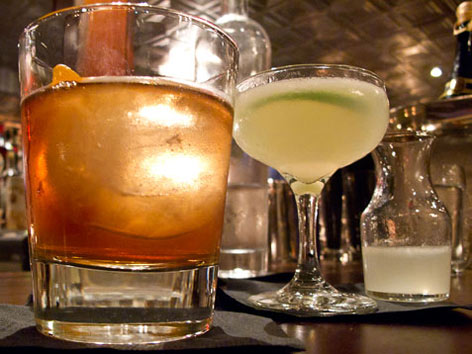 What: The liquor distilled within a two-hour (driving) radius of Nashville includes the obvious—Jack Daniels whiskey from Lynchburg—and the lesser known, such as George A. Dickel whisky (intentionally spelled the Scotch way) out of Cascade Hollow and Prichard’s rum and whiskey from Kelso. It was exciting news for Nashville residents and visitors when Corsair Artisan, a micro-distillery of handcrafted gin, vodka, whiskey, absinthe, and rum that has operations in Bowling Green, Kentucky, opened a second branch in Nashville in 2010—the city’s first distillery since Prohibition. While Corsair continues to make its unaged spirits in Bowling Green, Nashville is becoming its primary whiskey producer (though much of what’s being made is still being aged). Since then Prichard's has opened a second distillery in town as well, in May 2014 (see at bottom).

Good to know: The new Corsair space is in the old Yazoo brewery (1200 Clinton St. #110, map), and it keeps the tasting tradition alive in its new digs by offering regional craft beers on draft—alas, no whiskey to try there yet, though you can tour the distillery (see below)—in their attached taproom. (See local craft beer for more details.)

Where: One speakeasy-style cocktail bar in town, named for a Tennessee governor who once fought Prohibition, is especially celebrated for its way with spirits: the Patterson House (1711 Division St., map), where the innovative cocktail list is long, the juices are fresh, and the bitters and syrups house-made. The intimate, tin-roofed, book-lined space is dominated by a large handsome bar in which mixologists are carefully assigned to groups of patrons. (There’s also lounge seating and a sweet outdoor space.)

Order: The choices are dizzying, but to drink local, look for the brands mentioned at top. The cocktail list changes seasonally; at the time of our visit, there was the Jennings (usually a Dickel or Jack Daniels whiskey with some sort of wood-smoked cola) and the summery Kelso Daiquiri (Prichard’s Crystal Rum with lime and simple syrup); the latter is pictured above with the Bacon Old-Fashioned—a smoky, smooth concoction of (Kentucky) Four Roses bourbon infused with that Tennessee favorite, Benton’s bacon, which is then mixed with maple syrup and coffee pecan bitters (the giant globe of twice-filtered ice is the norm here). Most cocktails run about $11. Patterson House also carries a few bottles of Corsair Artisan—we tried the tasty triple-smoked American single malt whiskey that was behind the bar—though at the time of our visit, they weren’t being used in any cocktails. Of course, a lot of drinks here feature Kentucky bourbons, which might still be termed “regional.”