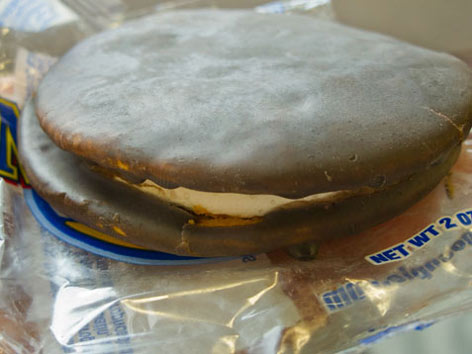 What: Born in Tennessee in 1917, the MoonPie—a s’more-like round cake of soft marshmallow sandwiched between two chocolate-coated graham-cracker cookies—is one of the South’s definitive snacks. Its storied history, as told by the company’s website, suits its regional-icon status: Created to complement a working man’s lunch for coal miners, MoonPie went on to partner with RC Cola as the dirt-cheap fast-food combo of the 1950s (actually spawning a country music song called “Give Me an RC and a MoonPie”); it traveled overseas to troops during WWII (and subsequent wars); it became the unofficial and then official snack cake of NASCAR; and since the ’70s, it’s been customarily tossed out of Mardi Gras floats all over the Gulf Coast. MoonPies hail from Chattanooga Bakery in Chattanooga, about a two-hour drive from Nashville, but you’ll find ’em all over this city and, indeed, the state.

Where: Our MoonPie was from none other than the Nashville airport—but while it does make a good last-minute purchase (and edible souvenir), there are plenty of other spots to find these. In Nashville, pop into any gas station or grocery/convenience store.

Order: A chocolate MoonPie ($1.29; prices will vary)—that’s the traditional flavor, though you’ll also see banana, vanilla, and even salted caramel these days, as well as “double,” “mini,” and “crunch” versions. According to the packaging, it’s “out of this world” when microwaved for a few seconds. We can see how a little warmth—and marshmallow gooeyness—would make it extra yummy.

Alternatively: You can have a true only-in-Nashville moment by ordering your MoonPie from the bar at the rollicking Robert’s Western World (416B Broadway, map), where it costs a buck. You might consider throwing in some fried pickle spears or a fried bologna sandwich.

Good to know: It’s an hour away but worth noting: Every June Bell Buckle, Tennessee (population: 420), holds an RC & MoonPie Festival, where snacks like batter-dipped, deep-fried MoonPies help fuel events such as a MoonPie toss, an RC dash, and the crowning of the RC-MoonPie king and queen. We feel a sugar rush just thinking about it.