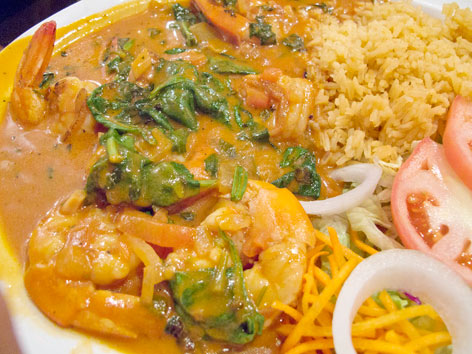 “Interior Mexican” is the term used in Texas to denote what many of us would simply call “Mexican” or perhaps “Mexican Mexican”—food that comes from Mexico as opposed to the Texas-Mexico marriage known as Tex-Mex (for which EYW doesn’t have a general category, but see also: breakfast taco, migas, queso).

The difference is not as black-and-white as simply saying Tex-Mex dishes tend to be the ones piled with yellow cheese (though that is often the case): Tex-Mex also relies a lot upon refried beans, ground beef, chips and salsa; dishes like enchiladas, fajitas, chili con carne, nachos. Interior Mexican cuisine, on the other hand, is composed of regional dishes from places like Oaxaca and Puebla; it’s where you’ll find your complex moles, a wider range of dried chiles and Mexican herbs, white cheeses, flavorful seafood dishes, tacos al pastor, flans, ingredients like nopal (prickly pear cactus) and huitlacoche (corn fungus).

The lines get more blurred in Austin every day, however, with many interior Mexican restaurants also serving Tex-Mex dishes, sometimes with more “authentic Mexican” ingredients (enchiladas de mole poblano, for instance), and vice versa. Don’t worry too much about semantics, then: Whichever you’re eating, it’s going to be typical Austin fare—and it probably tastes good, too.

Where: Our photo is of the shrimp Veracruzano from Polvos (multiple locations including 2004 S. 1st St., map), a popular Mexican restaurant in Austin that is locally celebrated for its self-serve salsa bar—don’t overlook the escabeche, a mix of pickled carrots, onions, and jalapeños—and fun, laid-back atmosphere. It bills itself as “interior Mexican” but also carries some Tex-Mex favorites, including a very thick and tasty queso.

Order: The saucy and satisfying shrimp Veracruzano ($18), a popular dish from Veracruz on Mexico’s Gulf coast. In this variation, the trademark tomato-based sauce included spinach, onions, and cilantro, and was accompanied by yellow rice and a house salad. We also loved the fajita al guajillo ($19), a Tex-Mex/interior Mex hybrid that combines chicken with sundried guajillo peppers, pecans, raisins, grilled onions, and poblano peppers to delicious, smoky-flavored effect. The lengthy menu has other favorites like tortilla soup, chiles relleno, chilaquiles, flautas, tortas…and of course margaritas and Mexican martinis from the bar.

A note about tacos: Tacos in Austin extend way beyond breakfast tacos, of course: Like Los Angeles, this is a taco town, and trying a few tacos—any of them, since Austin is not associated with one particular type over another—should definitely be a part of your Mexican food (and food trailer) exploration here. Among our favorites were the desebrada (shredded beef) and carnitas tacos at Tacos La Flor (512-417-4214; 4901 S. 1st St., map), where the thick corn tortillas are handmade, and—less authentically Mexican but very Austin-quirky—the creatively named “Trashy Trailer Park” taco at Torchy’s Tacos (multiple locations including 1311 S. 1st St., map), which combines fried chicken, green chiles, and queso to ridiculously tasty effect. For more on Austin’s taco scene, we suggest you check out Taco Journalism.

Alternatively: Fonda San Miguel (2330 W. North Loop, map), housed in a beautiful, art-filled hacienda-style building with its own dedicated organic garden, is the restaurant most synonymous with interior Mexican food here, as it’s largely credited with popularizing the cuisine in Austin when it opened in 1975. (It’s a bit pricey, but we hear it’s worth it.) La Condesa (400A W. 2nd St., map)—which focuses on more refined Mexico City-inspired offerings, including tostadas de atún and huaraches with hongo and huitlacoche—also ranks high, with price tags to match.

Of the many lower-priced options, there’s Las Palomas (3201 Bee Caves Rd., #122, map), with popular mole and cochinita pibil dishes, and Curra’s Grill (614 E. Oltorf St., map), where you can pair your carnitas plate with an avocado margarita—incidentally, we’re pleased to see the DF classic caldo Tlalpeño on both of these restaurants’ soup menus—and, even cheaper, El Mesón (two locations including 5808 Burleson Rd., map), where the menu is smaller and simpler but muy autentico.