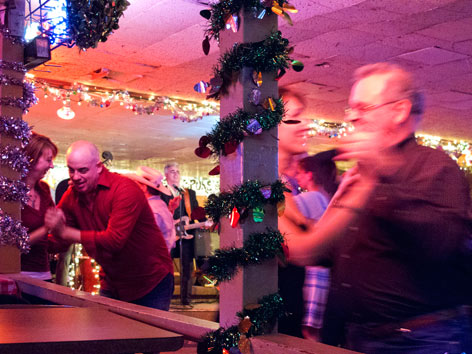 The feeling of landing in an unknown city is magical. It is even better when you have friends waiting to pick you up at the airport. On a recent EYW research trip to Austin, we had the pleasure of spending time with old friends with who had recently moved from the mountains of Washington to the vibrant capital of Texas. Seeing Jen and Kenton inside the terminal waiting for us—something my parents don't even do when we visit them in Florida—made us feel at home instantly. The drive to their house gave us the necessary "catch up" of our lives apart, but pulling our suitcase into their cozy little home felt like crossing the threshold into an actual new adventure for the four of us.

One thing I love about visiting people in their town is getting the inside scoop and true local experience. But another is actually giving them a new experience, by providing a reason to go to all the places they haven't yet discovered. The latter was what made Austin so special with Jen and Kenton. We dragged them from Airstream trailer to restaurant to bar, forcing native Austin food and drink into their bellies. While we did breakfast-taco research, we generously allowed them to take the mornings off to work, but by midday they were back in the car with us, ready to eat more and explore all that Austin (and the BBQ towns around it) had to offer. After dinner out (although they tried to stay home and cook kale), everyone was full and exhausted and eager for some downtime. But we wouldn't let that happen—not on EYW's watch! Nights were filled with live music—we actually saw legendary Austin musician Dale Watson perform three times at three historic locations three days in a row—and, usually, a late-night bowl of cheesy deliciousness: queso.
After five days and more than 20 places, endless drives back and forth over the South 1st St. bridge and brown butcher papers covered with BBQ grease, we all became seasoned Austinites. Certainly by the end, our friends were ready to see us go–not because they were sick of us, but because they'd seen enough of Dale Watson. But I bet they could still eat more queso….maybe with a side of steamed kale.
travel