On the Hunt for Oaxaca’s Best Tlayudas 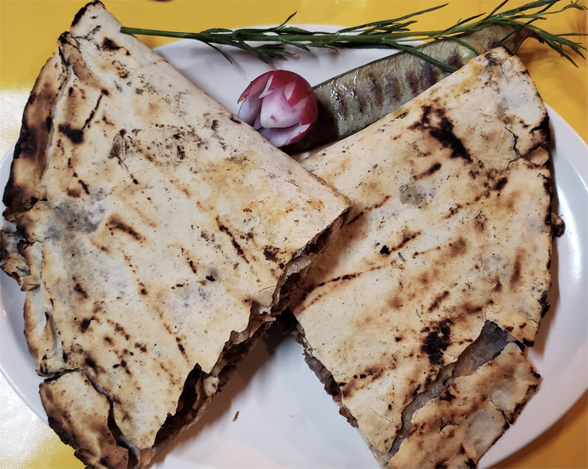 A tlayuda from Doña Favia in Oaxaca, Mexico. All photos courtesy of Catherine Tansey.

Few foods are more Oaxaqueño than the crisp, chewy tlayuda. Affectionately called “Mexican pizza,” tlayudas are large crispy tortillas, warmed on a comal and brushed with smoky asiento (pork lard). Toppings vary but usually include a smear of velvety black beans, shredded lettuce, and some type of salty meat like tasajo or cecina; the best are loaded with the famed chewy, stringy quesillo of the region.

But in my first few weeks in Oaxaca, I quickly saw that not all tlayudas are created equal. Several disappointed me, being either too crisp, too chewy, or too bland. I knew there had to be better, so I gave myself a mission: Find a tlayuda that felt worthy of its street food acclaim. Of the ones I tasted, these are my favorite tlayudas in Oaxaca. 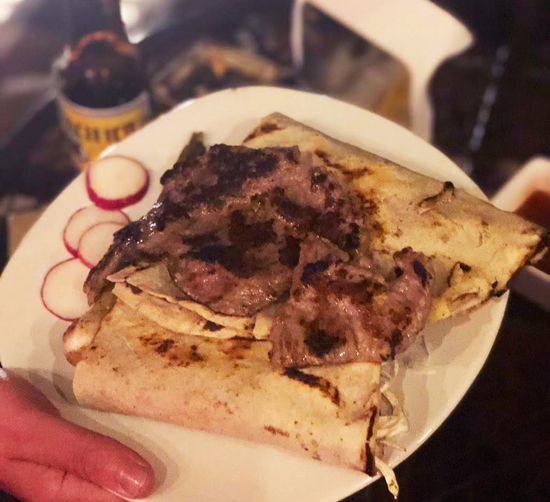 Café Lavoe
A Gurrión 108, RUTA INDEPENDENCIA, Centro, map
Tlayudas are drunk, late-night food, plain and simple. It’s why, in my quest to get the most well-composed, best-lit photos for this article (read: in daylight), I often found myself alone in an establishment. Yet it felt only appropriate to make at least one late-night visit for a tlayuda, and so after an evening of mezcal with friends, I found myself on a terrace perched above Santo Domingo Cathedral at Café Lavoe.

This was a smoky, crispy tlayuda con arrachera, so the folded tortilla was draped with a juicy slab of beef. Crunchy chopped lettuce added a much-needed bite of freshness, and the radishes served alongside kept the folded tortilla—which was slathered in pork fat, oozing with quesillo, and topped with that steak—from being too rich. It was my first great tlayuda. 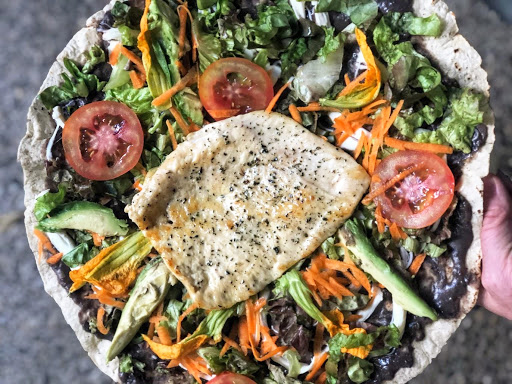 Mama Lechuga
Pochote Rayon Mercado, Rayón 411, Zona Feb 10 2015, Centro, map
Pochote Rayon is a charming organic market located a few blocks south of the Zocalo. As a solo traveler and amorous eater, I tend to flock to quiet, leafy locations like Pochote where I can savor each bite in peace. With a dozen or so vendors in the market, Mama Lechuga’s quickly became my favorite vendor.

It’s a “healthy” place, so I was unsurprised that my tlayuda came open-faced and loaded with veggies. The beans had a distinctly anise undertone, a sure sign they’d been prepared the “right” way with aguacate leaf. The delicate flor de calabazas were fresh and unblemished, and the pechuga de pollo, tender and well-seasoned chicken breast, sat perfectly atop the bed of buttery quesillo beneath. For veggie lovers, this is the tlayuda to get—but be sure to ask for it sin asiento if you’re vegetarian.

Open late and a long-time favorite of locals and visitors alike, Doña Favia’s tlayudas are served with strands of the grassy, bright Mexican herb chepiche and a carved radish on the side. I visited in the early evening after a bike ride out to El Árbol del Tule and ordered my tlayuda filled with chapulínes and chorizo—a dream for salt lovers like me. 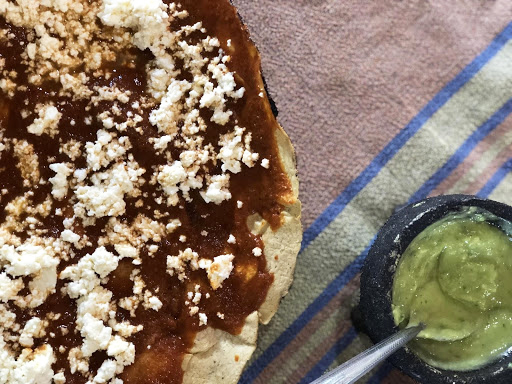 Biche Pobre
Calz de las República #600, Barrio de Jalatlaco, map
Biche Pobre is the restaurant in Oaxaca where I ate my first show-stopping mole, and in an instant, all of those years I claimed I didn’t like mole became the most unimaginable heresy of a woman I no longer recognized. All of which is to say: I thought this place would make the best tlayuda in all of Oaxaca.

That wasn’t exactly the case, but instead, I was introduced to something unexpected and still delicious: an open-faced tlayuda, super crispy and without any chew, topped with the sweet and spicy coloradito mole and healthy globs of tangy queso fresco. Turns out combining two of Oaxaca’s most famous dishes is a great way to enjoy them both. 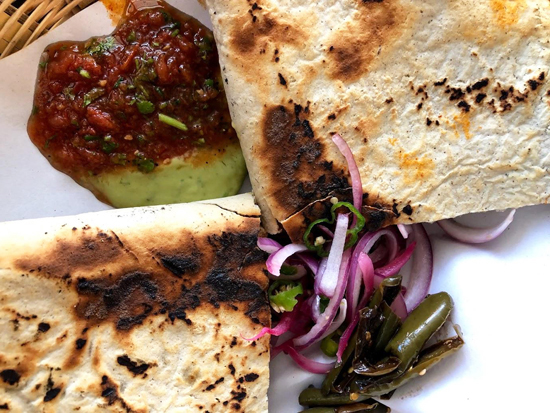 I Love Tlayudas
Rayón 619C, Zona Feb 10 2015, Centro, map
I Love Tlayudas is a sprawling open-air restaurant with colorful murals adorning the walls and a kid’s playground at one end. Despite the playful environment, it takes its craft very seriously. After just one visit, I became a convert. By then I’d had tlayudas that were good, great even, but not outstanding. Not truly delicious, or riquísimo.

I ordered a tlayuda con tasajo that arrived to my table with perfect pools of char on the outside and ropy quesillo on the inside. And there it was: my idealized tlayuda come to life.

Beyond the perfect execution of the tlayuda itself, I Love Tlayudas offers a bountiful condiment bar where you can try a dozen sauces and pickled vegetables. Even better, it offers mini tlayudas so you can try a few different ones.

In the end? Finding your favorite tlayuda is a matter of preference more than anything. Some vendors serve the open-faced, tostada-esque kind, while others opt for the folded tortilla dripping with quesillo. There are comedores committed to the traditional tlayuda and others playing with a modern approach. It’s appropriate, really, for such an iconic local dish. Tlayudas seem the perfect food to represent this diverse region: While there are many interpretations, methods of preparation, toppings, and philosophies, in the end you’re getting one great meal.

Want to save this for later? Pin it here! 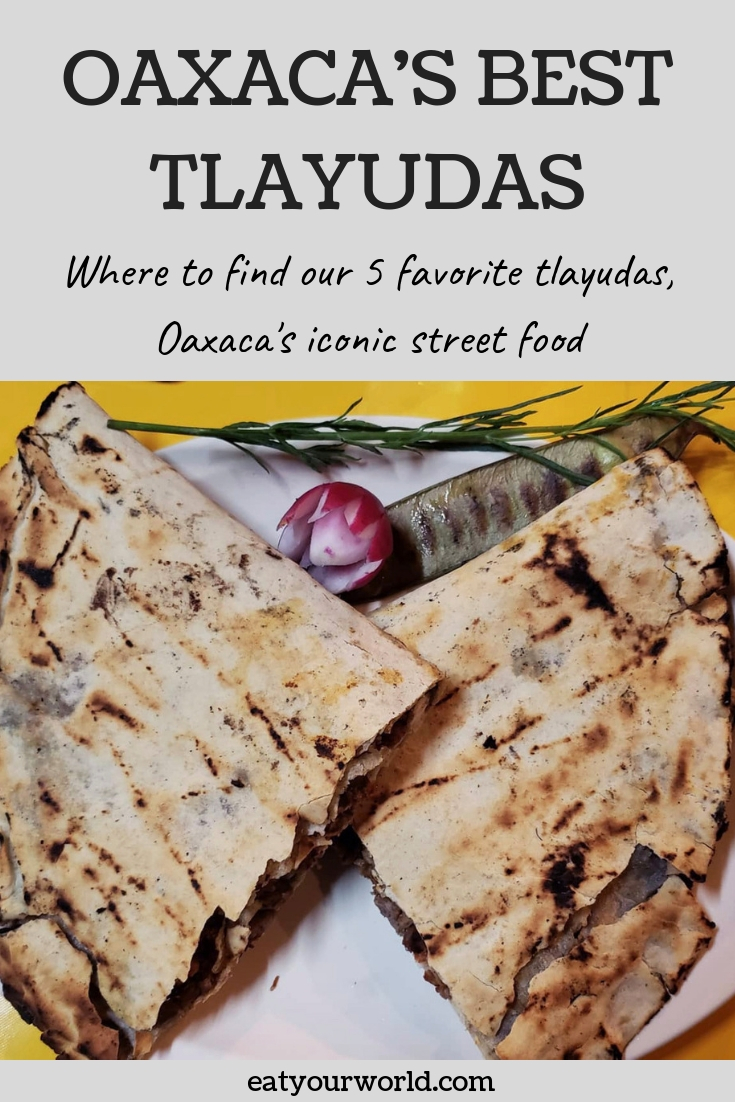 About the author: Catherine Tansey is a freelance writer living in Oaxaca. When she’s not practicing her Spanish or working on her pottery skills, you can find her playing cribbage with a mezcal in hand. Find her on Instagram @catherine_tansey or at catherinetansey.com. 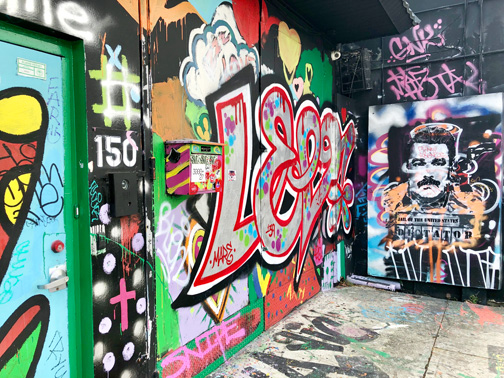 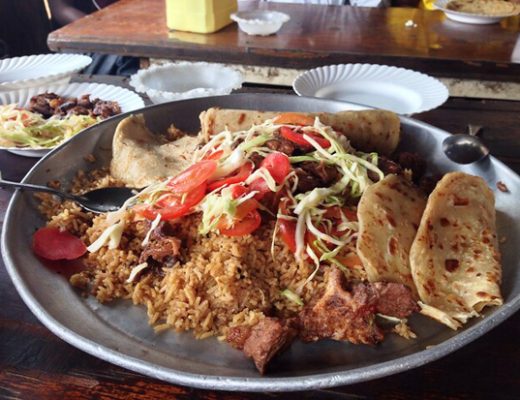