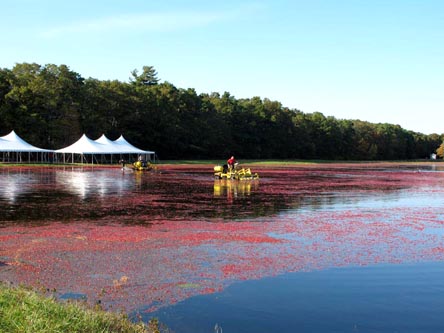 Cranberries. I don’t think of them too often, unless I’m throwing a handful of dried ones into my salad. Or, you know, it’s this time of year, when cranberry sauce makes its annual appearance in the Thanksgiving spread. But cranberries are an important fruit to the U.S., not only because of their more recently publicized “superfruit” antioxidant qualities, but because they’re one of the few fruits that originated on North American soil. They were a staple in the diets of Native Americans, who passed along the wild fruit’s benefits to the Pilgrims when they arrived in the early 1600s. Cultivation of the berries began on Cape Cod in 1816; commercial harvesting followed in 1847. Today, southeastern Massachusetts has more than 14,000 acres of cranberry bogs—some 900 bogs—and trails only Wisconsin in production of the fruit in the U.S. (New Jersey, Oregon, and Washington also produce cranberries, though in much smaller numbers.)

A few weeks ago in Cape Cod, we had the good fortune to witness a cranberry harvest, which happens every fall when the fruits reach their peak flavor and crimson color. We’d been in town for a mid-October wedding and had no idea it was harvest season until a local friend mentioned it. Scott and I are frequent visitors to the Cape and are familiar with the area’s many cranberry bogs, but we usually visit in summer, when they look like nothing more than dry, low-lying, shrub-covered fields. For the harvest, however, the soft, marshy bogs are flooded with up to 18 inches of water; water-reel harvesters are used to loosen the berries from their vines; and—the cool part—the berries, which contain pockets of air, float to the surface, where they’re corralled and loaded onto trucks. 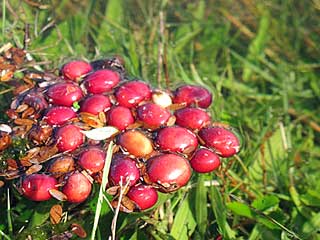 You can often observe a cranberry harvest from the road, as was the case at the Coonamessett bog—a bog first developed in 1890—we passed off of John Parker Road in Falmouth. Driving around a bend, we suddenly glimpsed a scarlet carpet of cranberries floating atop an ephemeral lake, glistening in the sun—a glorious vision only seen a handful of days a year. That this harvest coincides yearly with the multicolored fall foliage typical of the Northeast is almost unfair to the rest of the country.

We pulled over, walked around, picked up some floating berries at the bog’s perimeter, even ate a few—not really recommended, as they’re bitingly tart. The guys in waders and on machines waved and went about their business, oblivious (or accustomed) to our picture-taking, surrounded by the berries that would perhaps soon meet their fate in Ocean Spray packaging around the world—or on my own dinner table at Thanksgiving. Here, it all begins.