The Miracle of Maguey

The maguey plant can get you drunk three different ways and it’s not your college boyfriend — moreover, maguey (or agave) is used to actually treat syphilis, not cause it. A look at the humble maguey’s role in Aztec and Mexican life, past and present. 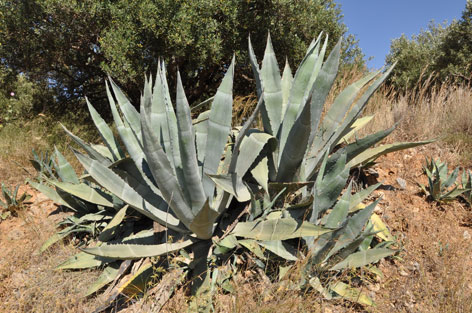 The maguey cactus, native to Mexico, is best known for its place in alcohol, specifically tequila, but it’s also eaten in a variety of ways, used to make fabric and clothes, and taken for medicinal purposes. Not a looker, this giant, spike-covered plant somehow made its way from desert cactus to unexpected star of ancient Aztec (and later Mexican) civilization, permeating food, drink, clothing, and health.

At a family restaurant in Mexico City’s La Roma neighborhood, I was three-quarters of the way through a plate of lamb barbacoa tacos—the meat melting with each bite, disappearing, leaving only a trail of happy taste buds behind it—when I realized my brunch table had two maguey products on it. The meat, cooked in the traditional barbacoa style, is wrapped in the long, spiky leaves of the plant, before being buried in the ground for a smoky night, reappearing cooked to the point of no resistance, just in time for my brunch. The leaves lend their flavor, but also help tenderize the meat, producing the incredible structure (or lack thereof) of the meat in the tacos. 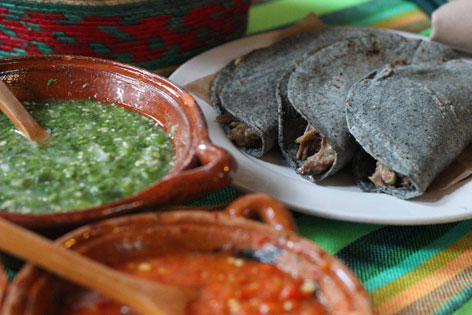 Next to my plate was a glass of pulque. Like home-canning in Brooklyn, pulque is a tradition that went out of style (for anyone under the age of 70) before making a comeback with a new generation in Mexico City’s hot nightlife neighborhoods. The youngsters aren’t clamoring to drink the viscous beverage, which is somewhat sour when sipped plain, with their barbacoa, however. Instead, they hit new-style pulquerias, where bright murals on the wall match the brightly flavored pulque curado, or flavored pulque.

“Remember that, like mezcal, not everyone likes [pulque], but if you give it an opportunity, it could be your new favorite beverage,” translates an online review for one of D.F.’s new pulquerias, El Nuclear. Browsing through further reviews, I see that a nearby bar specializes in a fellow maguey progeny, mezcal.

Watch: Peek inside a typical pulqueria in Mexico City.

Tequila is maguey’s most famous alcoholic avatar, and pulque perhaps its least well known. Somewhere in between lies mezcal. Unlike tequila (actually a form of mezcal itself, if we want to get scientific), which can be made only from the blue agave species and in and around the state of Jalisco, mezcal can be distilled from any type of maguey, anywhere, though it is a specialty of the state of Oaxaca. Mezcal, like pulque, is enjoying a reborn popularity, this time in the U.S., where cocktail lovers flock to its smoky flavor for added depth in new drinks.

When you sip on mezcal in Mexico, you might follow a minor tradition and pour a sip out, in reverence to Mayahuel, the goddess of the maguey plant and one of the Aztecan fertility goddesses. In an odd coincidence—or perhaps a testament to how advanced Aztec knowledge was—the maguey plant was also used to cure syphilis and gonorrhea. Its antibiotic properties, which we now know are the reason it worked to heal, were also used to treat wounds and other infections. Additional non-food uses of maguey include making it into rope and, even further down the production process, into clothes. 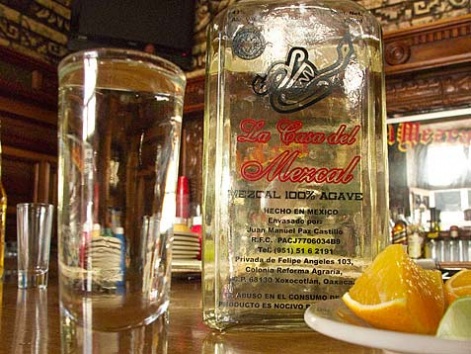 Mezcal, from a bar in Oaxaca

Nowadays, of course, the sippable and edible uses of maguey are far more popular, as commercial production of clothing and antibiotics has taken over. Mezcal is becoming the darling of mixologists around the world, pulque caters to Mexico City hipsters, and tequila remains the quintessential shot of college students and the base spirit of every vacationer’s margarita. Agave nectar, produced from the same sap that’s used to make pulque, has recently become popular as an alternative sweetener in the U.S., most notably as a substitute for honey in vegan diets and for refined sugar in low-glycemic diets. With the sap as sweetener, the leaves as meat tenderizer and flavoring, and the stalk (or at least the piña, its base) becoming mezcal, what becomes of the fourth part, the flowers? Those too are edible, though far less common: Outer leaves can be stewed and eaten, and the immature, unopened blossoms can be roasted or fried for snacks.

Back at my barbacoa table, it is striking how different the pulque in my glass and the meat in my tacos look and taste, despite sharing the same roots. Furthermore, the shot of smoky mezcal I take later that day resembles neither. Given the maguey’s intimidating spiky exterior, its sheer size (it will grow around 13 feet wide and six feet tall), and the fact that its surface is slightly irritating to skin, it’s a shock that anyone thought to eat the thing in the first place, not to mention create entire diets—nay, civilizations—around it.

Editor’s note:  For more on these maguey products, as well as a host of other local dishes and drinks, please see our full Mexico destination section.