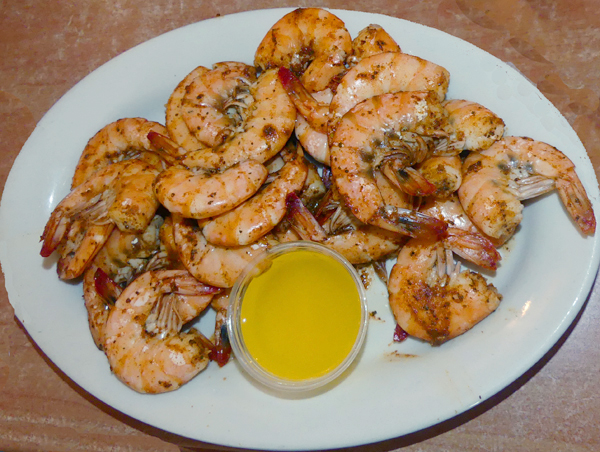 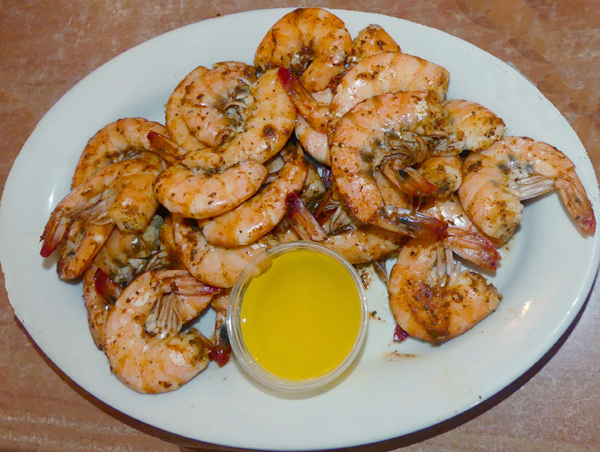 Steamed shrimp in the Outer Banks. All photos by Kathleen Walls.

Wherever you find sun and sand, there will be good seafood. Beloved summertime destination Outer Banks, barrier islands off the coast of North Carolina, has all three and more. Here’s where to find the good stuff. 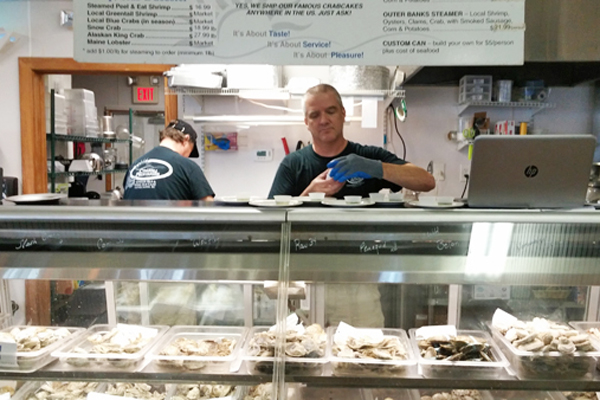 Coastal Provisions Oyster Bar & Wine Bar Café in Southern Shores is the perfect place for lunch after visiting the Wright Brothers National Memorial. The restaurant, market, and retail store hybrid is the brainchild of Dan Lewis and Scott Foster, both world-class chefs. The specialty here is oysters. While there are more than 20 varieties of raw oysters on offer—including those sourced from Cape Hatteras Oysters, operated by local father-and-son watermen—I personally love the oysters Rockefeller. The touch of bacon and blue cheese puts it over the top. The menu also includes fresh-caught seafood and other dishes. Since many visitors rent a house in OBX rather than stay at a hotel, the market is perfect for folks who want to cook their own food. 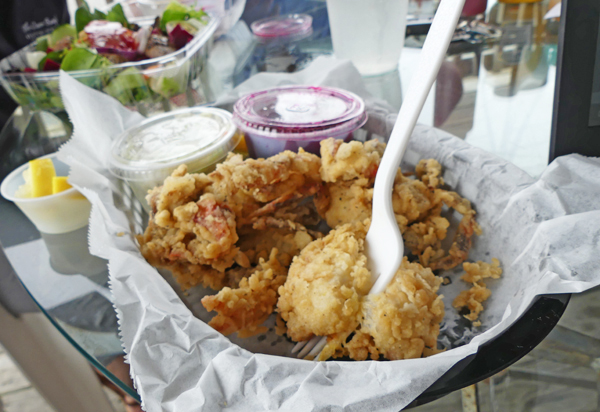 Another just-out-of-the-water seafood spot is O’Neal’s Sea Harvest, a family-owned restaurant and market at Wanchese Harbor. It buys from local watermen and either prepares the catch at the restaurant or sell it in its market. (It also ships nationwide.) There’s a soft-shell crab processing operation behind the restaurant where it buys crabs that are about to molt, called peelers, and keeps them in water tanks until they become soft-shelled. Naturally, that’s my favored order here, but lots of other seafood is on offer here.

Good to know: One of the watermen who sells fresh crabs and shrimp to O’Neal’s is Captain Marc Mitchum, a lifelong shrimper and crabber who docks his boat, the Jodie Kae, in Wanchese Harbor. He recently began offering shrimping and crabbing charters, so you can catch your own crabs and/or shrimp depending on the season. 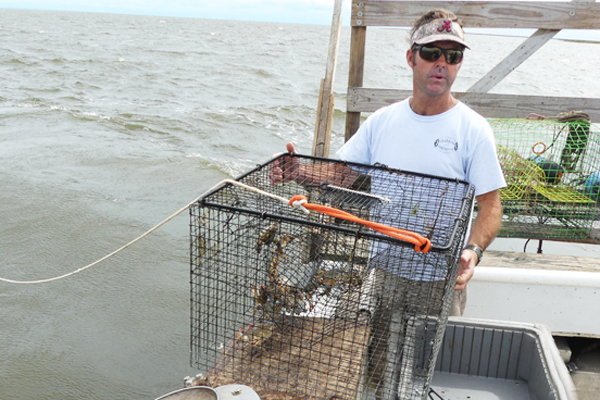 Diamond Shoals Restaurant in Buxton, adjacent to the Cape Hatteras Lighthouse—incidentally, the Lighthouse Beach was No. 6 this year on Dr. Beach’s top beaches list—is another multifaceted local food spot. It’s a fresh seafood market with all the spices needed to cook up your own feast, but it will also cook your catch for you, however you like it. It is Hatteras Island’s only sushi bar, a right-outta-the-water restaurant where the menu changes daily depending on what local fishermen have caught. I recommend the steamed shrimp—they’re huge, perfectly cooked, and well-seasoned with Old Bay and other spices (pictured at top of post). 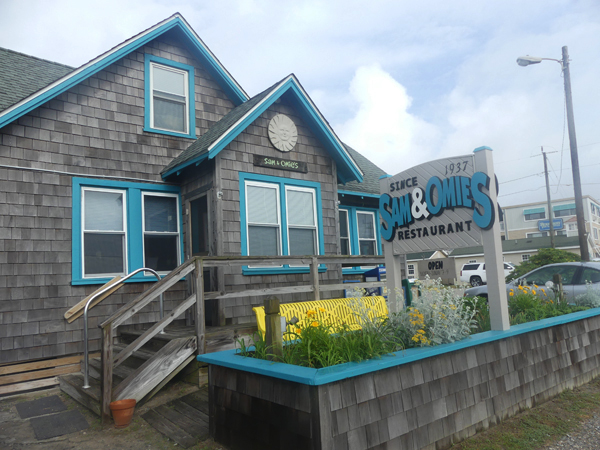 Sam & Omie’s Restaurant in Nags Head is the perfect place to start your day off right. How about a crab eggs Benedict? If you’re a down-to-earth breakfast eater, this place has it all, from sausage biscuits and spicy gravy to regular eggs, bacon, ham, sausage, grits, and hash browns in any combination. It’s also open for lunch and dinner as well; dinner is when you’ll find the seafood.  The restaurant opened in 1937 as an early breakfast stop for commercial fishermen and a place for them to hang out and have a few beers after a long day on the water, and it’s retained that salty-casual vibe. 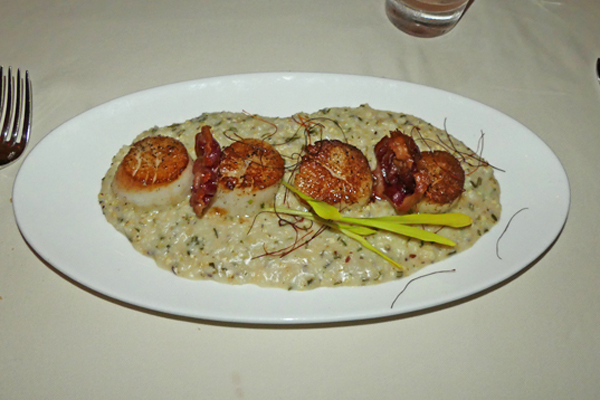 For a beautiful waterside dining experience, I’m a fan of Blue Water Grill and Raw Bar at Pirate’s Cove Marina in Manteo, where the menu includes lots of local seafood (meat too). There is a large oyster bar (look again for those local Cape Hatteras oysters), and fun appetizers like oyster shooters, a glass filled with a raw oyster, vodka, Bloody Mary mix, cucumber purée, lemon-honey horseradish, and an Old Bay rim. The tuna sashimi—pepper-seared rare tuna over wasabi coleslaw, crisp wonton, sweet soy sauce and Coleman’s spicy mustard—is large enough for a full meal. Seating is indoors or outdoors, and the sunset over the water is just stunning.

More upscale is Kimball’s Kitchen at Sanderling Resort. Its location on the sound side means you’re gazing at the sunset over Currituck Sound. The salads here are almost too pretty to eat, and of the seafood entrees, I love the brown butter-basted scallops over rosemary grits. What is not to love? Also, I beg of you: Do not miss the crème brûlée for dessert.

Trio is a unique marriage of beer, wine, and cheese retail shop; wine bar; tap house; and bistro. It offers a vast array of unique cheeses as well as wine and beer and a menu with something for everyone.  An interesting feature is the WineStation self-service tasting machines, where you can sample up to 24 wines.  Retail wines number over a thousand for local and those sourced from around the world. You’ll find about 24 craft beers on tap here. Whatever you go for, I suggest the meat and cheese board as an appetizer.

Not too many places make their own salt, but this is one of them! Hatteras Saltworks, on Hatteras Island, evaporates mineral-rich, high-salinity ocean water in hand-built solar ovens. The finished sea salt is often combined with dried rosemary or other spices to create the perfect flavor. Find it at Conner’s Supermarket, Pangea Tavern, the farmers market at the Koru Beach Klub in Avon (every Tuesday during summer), and the aforementioned Coastal Provisions.

Like in other beachy towns, the favorite drink of the Outer Banks is rum, and that’s made here too: Outer Banks Distilling in Manteo offers a distillery tour as well as the only local rum in OBX, called Kill Devil Rum. Head to The Brewing Station, a wind-powered brewpub in Kill Devil Hills, to sample a wide selection of drinks made with it. 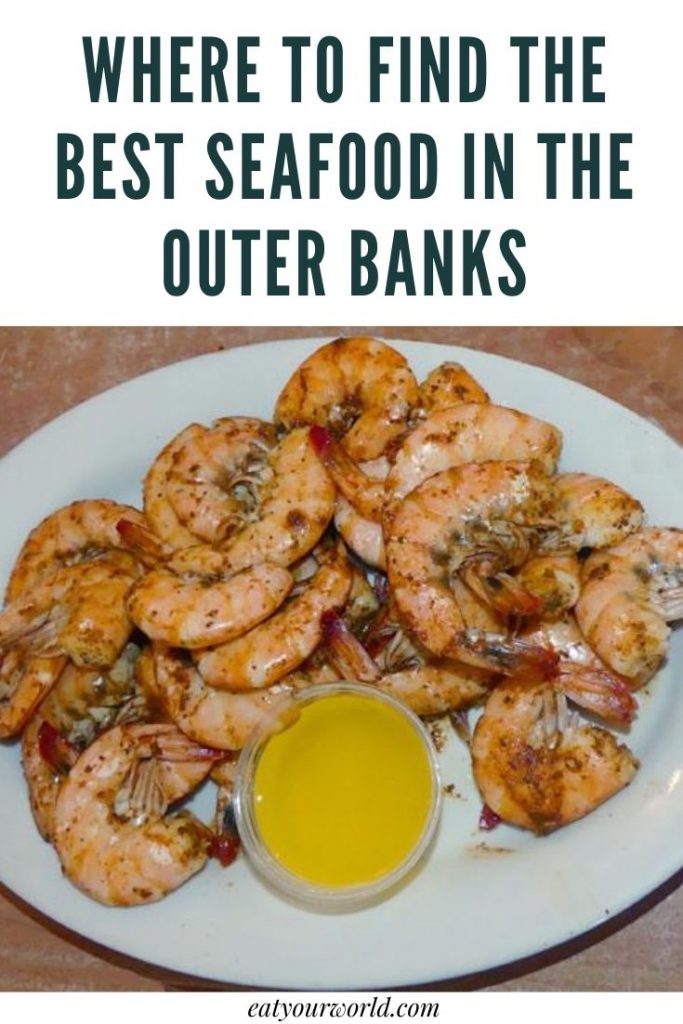 PIN to save for later

About the author: Kathleen Walls is co-publisher and writer for American Roads and Global Highways, the e-zine for anyone who travels. She is also the author of travel books Georgia’s Ghostly Getaways, Finding Florida’s Phantoms, Hosts With Ghosts: Haunted Historic Hotels in the Southeast, and the Wild About Florida series, as well as several online tour guides. She is a member of North American Travel Journalists Association (NATJA) and International Food Wine and Travel Writers Association (IFWTWA). 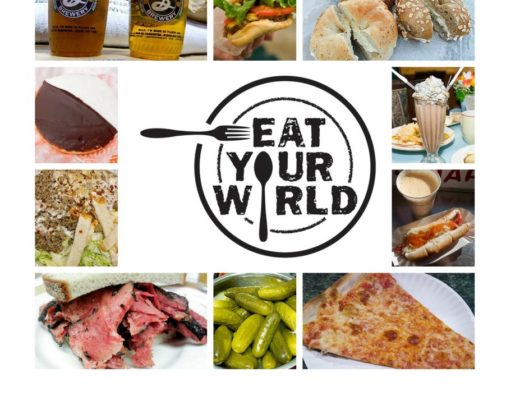 What to Eat in NYC? We Got You Covered 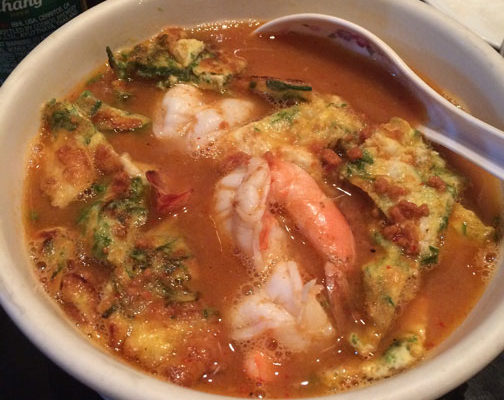 How to Truly Eat Everywhere