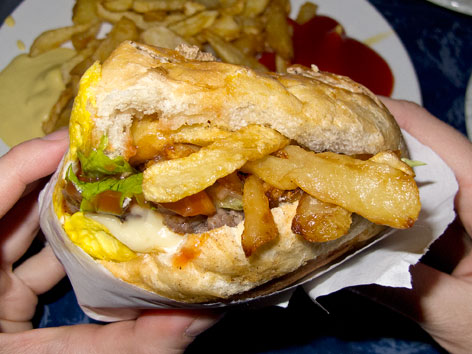 What: Is this an official “thing”? Who knows, but Senegal definitely has its own spin on how a burger is built: with a little bit of everything. Lettuce, tomato, onion: check. Cheese, fried egg, French fries: you betcha. And then the sauces—ketchup and mayo are pretty standard, but mustard and pimón (hot sauce) are also on the menu. Some expats we met here were fond of calling it a “Wolof burger,” but of course here it’s just a burger. We know it as a delicious hot mess.

Where: One of the locally legendary fast-food spots for burgers, shawarmas, rotisserie chicken, and the like is Chez Joe (33-824-2373; Blvd du President Habib Bourguiba, near Rue 11), where the surrounds are suitably dumpy for its tasty greasy-spoon fare.

Order: As might be suggested by Chez Joe’s hours of operation, the food here particularly hits the spot after a late night (or the next morning). But we immensely enjoyed this stuffed-to-the-gills burger (1,300 CFA) even while perfectly sober. It comes wrapped in paper for good reason—pull it off bit by bit to avoid its innards completely spilling out. (We ordered extra fries just to be safe.) Also good here are the fat, flaky beef-and-onion-filled fataya—more like an empanada than the fish-paste-filled fataya we encountered elsewhere—and the creamy cafta, or thiakry, which was sold in a refrigerator near the counter. We also tried the messy shawarma, another staple of any fast-food joint in Dakar, but were less impressed, finding it too heavy on the tahini here.

Alternatively: Downtown, Ali Baba (23 Av. Georges Pompidou, map) was among the first to popularize shawarma and kebabs around here, and remains a guidebook favorite for its greasy fast food. But we’ve heard that Chez Donald (33-823-85-92; 91 Rue Moussé Diop, approx. map) around the corner, is even better.