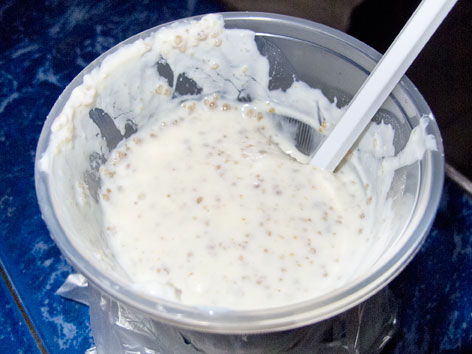 What: Millet is an essential grain in Senegal, and thiakry (also spelled thiakri, caakiri, etc.; pronounced “cha-kree”) is just one of its many common uses…so common, in fact, that you can find some in just about any grocery in Dakar. Creamy and sweet, thiakry is a mix of yogurt, millet (sometimes fonio, a traditional type of millet, or just couscous), and sugar or cinnamon. It’s popular for breakfast or a sweet snack.

Where: We picked up a housemade thiakry from the refrigerated case at Chez Joe (33-824-2373; Blvd du President Habib Bourguiba, near Rue 11), a no-frills fast-food joint better known for its greasy hamburgers and shawarma.

Order: The thiakry (500 CFA) made a delicious dessert after a fry-stuffed burger: sweet and creamy and speckled with millet, which had the consistency of couscous but slightly chewier. It reminded us of sweetened yogurt sprinkled with wheat germ. This container was large and kept well for a few days in a refrigerator.

Alternatively: The Dakar-based Jaboot brand of thiakry can be found in refrigerated cases in just about any grocery store. It’s hugely popular among locals for a quick and sweet breakfast, but although we enjoyed it on numerous occasions, it’s definitely much sweeter—and with chewier grain—than the homemade version we tasted at Chez Joe.