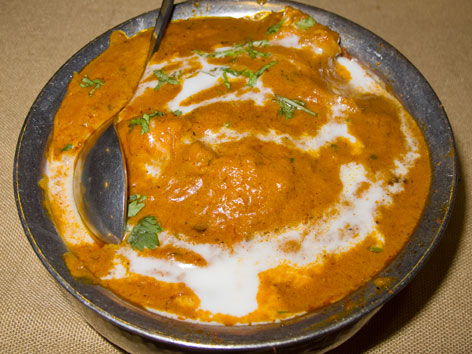 What: A favorite dish of Delhi, butter chicken is one of several Punjab-associated foods with a likely Mughlai influence. The Mughals, Muslim emperors who ruled India for a few centuries beginning in the 16th, were fond of a royally rich cuisine: boldly flavored curries; lots of ground and whole spices, dried fruits and nuts; roasted meats. The fact that some of these qualities were shared and/or adapted by Punjabi cooks explains why this type of food is still found all over North India. But of those bold curries, butter chicken, or murgh makhani, is the richest of all. The Punjabi founder of Delhi’s Moti Mahal restaurant (see below) claims to have invented both this and tandoori chicken—basically, the former was created once a buttery sauce was devised for the latter—but butter chicken retains many of the Mughlai trademarks: roasted meat, lots of spices, a thick gravy of butter, cream, and tomato. Add some fluffy traditional naan—or better yet, butter naan—and it’s impossible to go wrong.

Good to know: It’s said that butter chicken is the Indian forerunner to chicken tikka masala, allegedly invented in the U.K. in the 1960s to cater to the British palate. The (decidedly unscientific) differences between the dishes? CTM is generally boneless, with a curry dominated (often) by tomato and cream; BC is traditionally on the bone—and features more butter. Lots of it.

Order: Butter chicken (340/550 rupees for half/full order)—so rich and buttery and a bit sweet, the half order is plenty—which can be ordered boneless for an extra 25 rupees. It’s served with butter floating around its edges; you might as well go all in and order the butter naan, too, downright decadently coated in the good stuff. For something a wee bit lighter, don’t miss the excellent tandoori chicken here.

Alternatively: Try another of the popular Pandara Road restaurants, like Havemore (2338-7070; 11-12, Pandara Rd. Market, map). But if you can make it to the original Moti Mahal (3704, Netaji Subhash Marg, Daryaganj, approx. map) in Old Delhi—it’s now a big chain of restaurants, presumably run by different descendants of the Gujral family, as the original claims it “has no branch”—you should, for history’s sake. (Plus, the butter chicken’s said to be darn good still.) For another twist on this Punjabi classic, head to Aslam Chicken Corner in Jama Masjid (not far from the famous Karim's; next to Excelsior Bakery, Matia Mahal Bazaar, approx. map). Brought to our attention by this drool-worthy user photo, Aslam's take on butter chicken takes the tomato out of the equation, leaving you with a bowl of charcoal-grilled chicken drenched in a creamy butter sauce. We have heard it is stunningly delicious.