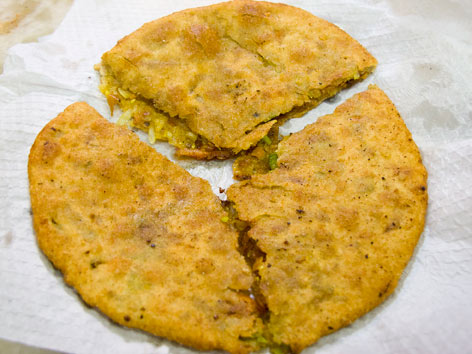 A pan-fried, usually round unleavened flatbread made from wheat flour, the Punjabi paratha (also spelled parantha) is often stuffed with vegetables and/or paneer—or even something sweet, like khurchan; read below. It is served with various accompaniments, such as chutneys, yogurt sauce, pickled vegetables, and spicy potato-and-veg sabzi.

Paratha were likely enjoyed by the Mughal royalty of yore, as these flatbreads, cooked in ghee and made with extra ingredients, were once reserved for special occasions or guests. Compared to other Indian breads, like roti, paratha is rich and sumptuous. It’s also versatile, being popular for breakfast, lunch, or a late-night snack. When done well, it is crisp, soft, and chewy all at once.

If you are wondering about the difference between paratha vs. naan vs. roti (or chapati), we break it down in this Indian flatbreads post. But, essentially, while those breads are meant to be sides to rich saucy dishes, paratha is more its own standalone dish. It's plenty rich on its own, thanks to the pan-fry, its many fillings, and its host of accoutrements.

Where: Old Delhi is famous for its parathas, and eating one here is a must—specifically on the Parathewali Gali, a narrow winding lane off of Chandni Chowk named for the paratha-makers that have long graced it. Though legend dates it back to the Mughal days of three centuries ago, the current vegetarian-only shops—only a few remain of the estimated 15 or so once found here, allegedly all from the same family—opened in the 1870s-1880s.

We visited the popular first wala (approaching from Chandni Chowk), Pandit Babu Ram Devi Dayal (98116-02460; Parathewali Gali, map), which has a small seating area with indoor fans. The shops here are notable for using small, deep cast-iron kadhais to fry their parathas, rather than the more common flat tawa skillets.

Our favorites were the “mix” (35 rupees), which combines a bunch of veggie ingredients, and the khurchan (50 rupees), named for a simple milk-based sweet, an increasingly hard-to-come-by Old Delhi specialty. The khurchan paratha blew our minds a bit—rich, sweet, and creamy inside; tender-crisp and savory outside. It’s not the only sweet paratha available, but it is probably the most interesting. Accompaniments with paratha here included sweet imli (tamarind chutney), aloo-muttar (potato and peas), pickled vegetables, and jackfruit.

Good to know: While it’s wonderful inside a paratha, khurchan alone is a traditional Old Delhi sweet. You might seek out a khurchan-wala like this one during your travels about town.

Alternatively: Try any of the other vendors on the Gali, or head to Old Delhi’s Nirmal Restaurant (756, Chandni Chowk, map), a.k.a. Asha Ram, for good parathas and more space, with a nice view of Town Hall. (Nirmal’s paneer paratha comes especially recommended by various sources.) For another variation (still in Old Delhi), try the popular naan-like stuffed parathas at Kake di Hatti (654, Church Mission Rd., map), unusually cooked in a tandoor oven.