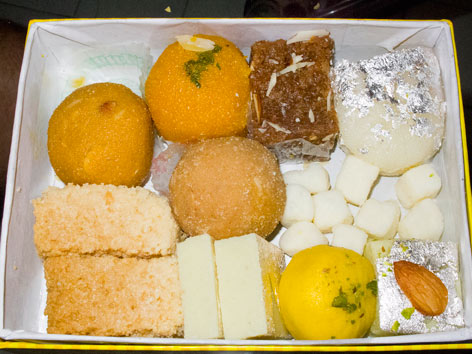 Indian sweets are so numerous and dizzyingly varied—the colors! the shapes! the textures!—that one look at a typical counter might send a foreigner here running to the nearest Baskin-Robbins. Don't do that! And don't be intimidated: On this site we’ve attempted to organize India’s vast mithai (sweets) scene—at least the tip of the iceberg—by concentrating on two of its basic categories, both of them common in Delhi: sweets made with ghee and those made with milk or khoya (also spelled khoa), a semidehydrated milk product. (To further complicate things, many of the latter sweets likewise use some ghee, but it’s the milk or khoya that really defines them.)

To overgeneralize, because there are always exceptions to the rule, the khoya-based Indian sweets tend to be those with the drier, crumblier texture. Among the popular ones in this corner, there’s the lovable syrup-soaked gulab jamun (for which we've written a separate entry) but also the tasty, square-shaped barfi (or burfi); the prevalent milk cake, crumbly and, well, cake-like; and peda, a soft, doughy, delicious ball of sweetness.

Where: We scored the above box o’ sweets at Anupama (2924-3311; HS-12, Kailash Colony Market, map), a friendly, local sweets-and-snacks restaurant in South Delhi. Notably, the staff behind the extensive sweets counter wore gloves, which isn’t necessarily the standard around here.

Order: Included in the box pictured, counterclockwise from bottom left, is milk cake, plain barfi, kesar (saffron) peda, pista (pistachio) barfi, and chaina murgi (made with chenna, like a crumbly paneer, or cottage cheese). Also pictured are a few delicious ghee-based ball-shaped ladoos. The whole box cost us 182 rupees. But we suggest you experiment at the counter—a great way to discover new favorites is to simply ask for recommendations from the staff or other shoppers.

Alternatively: Other good spots to sample a wide range of sweets are the trusty Haldiram’s (multiple branches including 1454/2, Chandni Chowk, Old Delhi, map) and Bikanervala (multiple locations including A-80, Central Market, Lajpat Nagar-II, map) franchises, as well as both Bengali Sweet House and Nathu’s Sweets in Bengali Market (map).