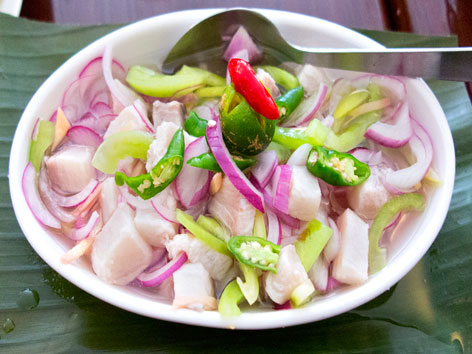 The closest comparison for kinilaw is ceviche, except ceviche uses citrus fruit like lemons or lime to dress the seafood while kinilaw uses the ubiquitous coconut vinegar, plus garnishes like garlic, onions, ginger, and chiles. Actual connections to South American ceviche are vague, as early accounts of the Spanish explorers and missionaries in the Philippines indicate the natives were already consuming a lot of fish, some in a style called cquilao (also pronounced “kee-lahw”) that was likely a precursor of this dish. Kinilaw hasn’t changed much over the years, with the best versions relying on good vinegar and fresh raw fish—connoisseurs say it should be “washed,” not soaked, in the vinegar, turning the pink flesh white and just slightly opaque. Fortunately, both of these things are abundant in Cebu, even on its smallest inhabited islands.

Where: Kaona Grill (032-260-1565; Wilson St., Lahug) serves traditional kinilaw (Php 135) as well as a version called sinuglaw (“see-noog-lahw”), yet another joined-together word, this time of sinugba (meaning grilled) and kinilaw. (For that dish, grilled pork cubes and fresh coconut milk are mixed with the kinilaw to add a rich, meaty dimension to the fish.)

Order: Pictured is kinilaw with tanigue (Php 135), a type of local mackerel that we prefer for its freshness. (Kaona Grill also offers kinilaw using tuna, usually yellowfin, but it is likely frozen and flown in.) Our kinilaw arrived quickly, looking appropriately pink and accompanied by thinly sliced bombay (“boom-bye,” the local term for purplish-red onions), slivers of ginger, slices of green tomatoes, green finger chiles, and limonsito with bird’s eye chile on top. It had a little sweetness to it, which we didn’t love—we suspect a dash of sugar made its way into the vinegar—but otherwise, the kinilaw was an excellent starter for a meal that might include grilled liempo (pork belly), crispy pata (deep-fried pig trotter), and buttered grilled prawns.

Alternatively: Food-court kinilaw does exist, but it generally sits out (turning sadly opaque) for hours, so it won’t be the best representation of the dish. Opt for Filipino/Cebuano-style restaurants that will create your kinilaw upon order, like Boosog Lasang Pinoy restaurant (63-32-238-1600; The Gallery, Juan Luna Ave., Mabolo, map), where sinuglaw is also served.