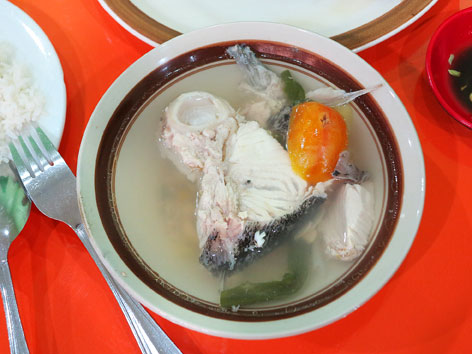 What: Tuwa, tinuwa, or tinola (“too-wah,” “tee-noo-wah,” “tee-noh-lah”) all refer to the same thing in Cebu: The spartan fish stew and Cebuano staple composed of fresh fish, water, tomatoes, finger chilies, salt, and onions or leeks. Sometimes ginger, lemongrass, kamunggay (moringa), or iba (an acidic fruit) will be added—though definitely not all at once—to give it more flavor, but Cebuanos know that tuwa is best kept simple, so that the fish can take the spotlight. Almost any fish can be used for tuwa, but most eateries and restaurants prefer big fish such as blue marlin or grouper. Tuwa is ridiculously quick and simple to make—a true native dish that’s fuss- and frills-free, and unanimously satisfying. Together with sinugba and kinilaw, it is also indicative of how Cebuanos prefer to cook: sutukil (“soo-too-kill”), in which the tu stands for tuwa and refers to food simmered in broth (the su represents sugba, for grilling, and the kil is for kilaw, or foods eaten raw).

Good to know: Outside Cebu, tinola is a light, clear chicken soup with ginger and tender greens from finger chile plants—similar concept, but an entirely different dish.

Where: Near SM City Cebu, divey Parr’t Ebelle (63-32-419-1611; Road 6, North Reclamation Area, map) specializes in fish, fish, and more fish, done sutukil style. It likely started as a humble eating stall later expanded to accommodate some 80 diners, with a closed-off air-conditioned room to boot. The best way to order is to look at the grill and the bubbling cauldrons of tuwa before taking your seat and then flag down the wait staff—they don’t wear uniforms, but it’s safe to engage anyone carrying plates or trays!

When: Daily, 11am-11pm. Lunchtime is the best time to go, as the fish is fresh from the morning’s catch. But arrive before noon to avoid the lunchtime crowds.

Order: Tuwa for Php 90 from a three-foot-tall cauldron sounds like a risk, but it’s legitimately delicious. The soup is clear and light, not at all fishy, with the tomatoes, leeks, and iba adding flavor, and the large chunk of fish deserved to be picked to the bone. We couldn’t resist slurping the whole thing from the bowl. There’s enough soup and fish for two people to share, especially if you want to order other savory items here, like grilled squid (which was excellent) or grilled fish bellies. Try your tuwa here with mais humay (“mah-ees hoo-my”), a heavy, solid cornmeal that many Cebuanos prefer over rice when they eat at home—this restaurant is one of the few that actually sells it.

Alternatively: There is something special about getting your tuwa at Parr’t Ebelle, but in case you don’t make it to that part of town, you can find decent tuwa from good Filipino/Cebuano restaurants like Boosog Lasang Pinoy (63-32-238-1600; The Gallery, Juan Luna Ave., Mabolo, map), Lantaw Floating Native Restaurant (Day-as Cordova, Mactan, map), or Chika-an sa Cebu (63-32-420-9221, multiple locations including Parkmall, 168 Ouano Ave., Mandaue City, map). Be warned: The sutukil restaurants near the Mactan Shrine will be pricier and more touristy than others.