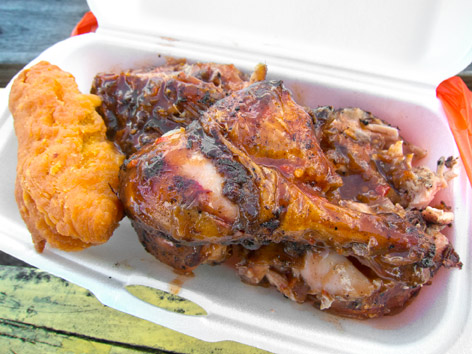 What: This Jamaican import and Caribbean staple, in which chicken is coated in spices and slow-cooked over a live fire or grill, has been wholeheartedly embraced by Antigua, perhaps because there’s a good number of Jamaicans living and working on the island—or maybe because it’s just so damn tasty. Either way, most jerk-chicken joints here are low-key, no-name affairs, just a few grills on the side of the road. Pull over if you see one!

Where: That’s exactly what we did en route to the airport, when we spotted Jerk Master (268-728-0819; Old Parham Rd.) on the roadside just before the airport turnoff. As we checked in with greasy fingers between bites of chicken, the airport staff smiled knowingly.

Good to know: On Jamaica, jerk chicken—whose origin is credited to African slaves on the island—is famous for its pungent marinade, marked by allspice and super-spicy Scotch bonnet peppers. The variety on Antigua is not quite as intensely spicy. We’ve also heard that the tendency here to coat the chicken in a spicy BBQ-like sauce is not the Jamaican norm.

Order: An order of jerk chicken runs 12 EC and comes with freshly made festival, a slightly sweet Jamaican fritter that soaks up the excess sauce nicely. As for that sauce: The chicken was coated in some, but not too much that this tasted like BBQ chicken. The flavorful jerk marinade—spicy, a bit salty—still shined through. Also on offer here is jerk pork and BBQ pigtails, another popular Antiguan pork dish, and you can sometimes get fresh coconut water from the stand next door.

Alternatively: In the south of the island, Shirley Heights Lookout (268-728-0636; Shirley Heights, map)—sister facility to Russell’s in the northwest (see souse, seasoned rice)—does a good jerk chicken on Sundays as part of its afternoon steel-drum party and buffet, which starts around 4pm. It also offers one of the best views on the island, overlooking picturesque English Harbour. (Note: The restaurant is on the grounds of the historic Shirley Heights military complex, which charges an entrance fee. If you’re passing through just to visit the restaurant, the fee will be waived—you may be asked to present your restaurant receipt on the way out.) We also liked a no-name jerk-chicken joint, recommended by a Jamaican resident, located near the KFC (approx. map) on Anchorage Road, in the Runaway Bay/Fort James/St. John’s area.