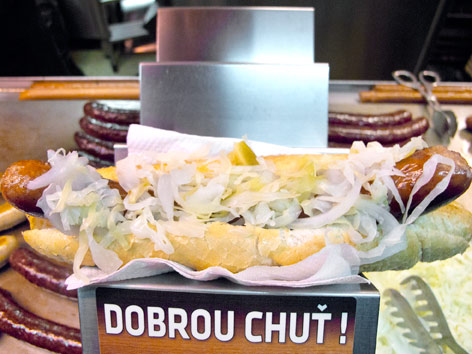 What: Klobásy are grilled sausages, ubiquitous grub on Prague’s well-trod streets and in its beer gardens. You’ll see a few different varieties, but, like any good sausage, they’ll typically involve mustard, bread, and probably beer. One tasty, greasy klobása (singular form) is all you need to fuel up for more sightseeing—or get you through the next few pivos.

Where: Failing a good beer garden—they tend to close in winter, after all—the street is the best place to try this. One surefire place to find klobásy is Wenceslas Square, a bustling boulevard-like commercial district in the city center, where you’ll see sausage stands two to a block. The one we visited was called DMJ (Václavské náměstí 42, Praha 1), which appears to be the name of the company that owns several of these stands. Street stands are, of course, hit or miss—you never know if you’ll get an overcooked sausage that’s sat out too long. When in doubt, head for the stands getting a lot of traffic.

Order: Picturedis the Václavská klobása (Wenceslas Square sausage, 50 CZK), on a roll (rohlík) with sauerkraut; self-serve mustard is a must as well. This sausage hit the spot in the moment, but we found it a bit too fatty. Later we learned that the spicy, deep red Pražská klobása (Prague sausage) is widely considered the best option at these stands, and you should ask for Czech brown bread to replace the inferior roll (mustard remains the essential condiment). Other sausage options at these stands include the white Bavorská (Bavarian), usually served with fried onions, and the red Staropražská (Old Prague), plus a few others. You might also consider a smažený sýr (fried cheese) sandwich here—especially if you’ve been out drinking.

Alternatively: In warm weather, try klobásy at a good beer garden, like the one inside Letenské sady (Letná Park, map) or Riegrovy sady (map). And in your travels about town, also look for párky, the local frankfurters: The ones we had at Lokál (multiple locations including Dlouhá 33, Praha 1, map) were deliciously spicy and snappy, served with mustard and a pile of fresh horseradish.