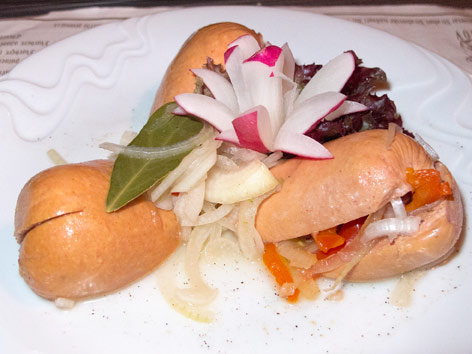 What: Also in the pickled-pub-snacks corner (see nakládaný hermelín, or pickled cheese) is utopenci (“oo-toh-pen-tzi”), or pickled sausages. For this Czech dish, meat tubes get pickled in a tangy, vinegary marinade with onion, black pepper, bay leaf, and other spices, and then eaten cold with bread.

Its name translates as “drowned men,” actually: As one origin tale goes, the alleged inventor of this dish, a pub and mill owner, drowned one day while working on his mill. Another etymological explanation is that the name comes from the sausages themselves, which, when stored in their usual glass jar, resemble floating fingers or, by extension (we guess?), men. You gotta love that dark Czech sense of humor.

Where: One of our favorite places to drink microbrews in Prague is also a fine place to sample utopenci, when it's offered on the menu: Klášterní pivovar Strahov (Strahovské nádvoří 301, Praha 1, map), the onsite brewery and restaurant of the Strahov monastery, a short walk from the famous Prague Castle. Beer’s history is long and rich here—the monastery was founded in 1142; brewing began around the 13th or 14th century, ended in 1907, and returned to the complex in 2000, following a lengthy renovation—so it only follows that beer snacks will also be good here (if a tad overpriced).

Order: Domácí utopenec, or homemade pickled sausage (59 CZK); “utopenec” is the singular form. Tangy, savory, and a little spicy, the sausage was deliciously piquant with the handcrafted pivo here. The meat itself reminded us of mortadella in taste and color; it was served with lots of pickled white onion and red pepper, a healthy sprinkling of black pepper, and a nice radish garnish (plus a rogue bay leaf, undoubtedly from the pickling jar).

Alternatively: You can find this dish for a lot cheaper at any old pub, whether the divey one on your corner or one that specializes in great Czech beers, like Zlý časy (Čestmírova 5, Praha 4, map), where it’ll set you back 25 CZK.