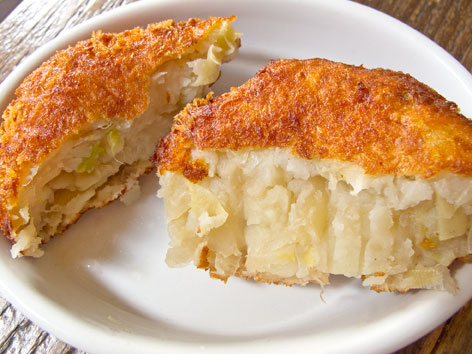 For such a curiously named dish, the classic British dish known as bubble and squeak is, well, kind of boring: It’s just vegetables, usually potato and cabbage, pan-fried together and served as a side dish. Historically, it holds some significance, as it dates to at least the late 18th century, according to The Oxford Companion to Food, which also notes the dish was originally made with beef, too. (Likely the ingredients were leftovers from a Sunday roast.)

Its name is said to have come from the noise created during the frying process, which makes us wonder if perhaps a 10-year-old came up with it. In any case, it tastes good: Comforting and a bit greasy, it’s no wonder it’s still a breakfast-brunch mainstay—and an excellent hangover food.

Order: When available, Caravan’s bubble and squeak isn’t, we admit, totally traditional—instead of resembling a loose, pan-fried hash, here it’s more a crispy patty, almost like a deep-fried knish of sorts. But its innards were good old potato and cabbage, and we enjoyed the crunchy texture. It was offered as a side (£3) during our visit, and usually as part of at least one dish, like grilled ham with poached eggs and Hollandaise sauce. The pour-over coffee is a highlight here.

Alternatively: Most restaurants doing a good fry-up will have bubble and squeak on the breakfast menu, including Mother Mash (multiple locations including 26 Ganton St., map) in Soho, Bill’s Cafe (28 St. Martin’s Courtyard, map) in Covent Garden, and Roast (The Floral Hall, Stoney St., map) in Borough Market, where it’s made with beef drippings.