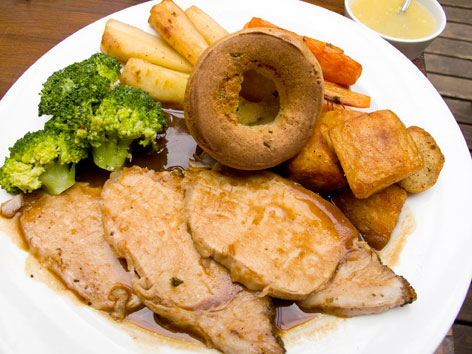 What: Britain’s traditional main meal on Sunday revolves around good ol’ roasted meats and potatoes. Sort of like a weekly version of Christmas dinner, it’s served in the early afternoon, though it’s just as often called “roast dinner” as “roast lunch” since it acts as the day’s big meal. The meat is traditionally roast beef—nowadays pork, lamb, chicken, and game birds are common as well—and accompaniments include roast or mashed potatoes, seasonal vegetables, gravy, (sometimes) stuffing, and Yorkshire pudding. The latter, a savory, popover-esque side made of a simple batter, was devised in the north in the mid-18th century as a cheap and filling extra that (once) used the excess meat drippings—however, while it was historically served as an appetizer prior to the main meat dish, Yorkshire pudding is usually served as a side today, at least for pub roast lunches.

The origins of a Sunday roast lunch are a bit murky, but trust that for centuries— possibly since medieval times—it’s been a common practice. In more recent decades it’s represented the weekly bringing together of family after church, throughout which the meat would cook. Apparently, it’s less a domestic ritual these days, but fortunately, the pubs seem to have picked up the slack for you and your friends: If you’re not cooking come Sunday, someone else will do it for you.

Where: We had a lovely Sunday roast lunch at the The Carpenter’s Arms (73 Cheshire St., map), a handsome, refurbished pub in Shoreditch with a nice outdoor heated garden. A short walk from the area’s many Sunday markets—Brick Lane, the Old Truman Brewery’s Sunday UpMarket, Spitalfields, the colorful Columbia Road flower market—the pub is perfectly located for an exhilarating day of East Side shopping and eating.

Order: During our visit, the pub offered roast beef and pork loin, gratefully in two sizes: regular (£12.90; pictured) and large (£15.90). The meat was nicely gravied and came with roasted crispy potato, sweet carrots, parsnips, and broccoli, as well as a nice hunk of biscuit-like Yorkshire pudding (pictured at center of plate) and a side dish of applesauce. (In lieu of getting our Yorkshire pudding first, we got a terrific bread basket with butter.) If you’re not feeling a roast, there are other great options too, including an excellent Scotch egg and delicious potted smoked mackerel.

Alternatively: There are plenty of good alternatives out there, such as highly regarded gastropub The Bull & Last (168 Highgate Rd., map) in Hampstead, which often does roasted chicken and rib of beef with the works in addition to a full menu. If you’re east of town, try the Greenwich Union (56 Royal Hill, map) over in Greenwich’s Royal Hill, which is celebrated just as much for its gastropubby food menu—including a proper Sunday roast (with choice of about three meats, or vegetarian)—as it is for its extensive beer selection (notably, it’s Meantime Brewing Company’s first pub; see local craft beer).