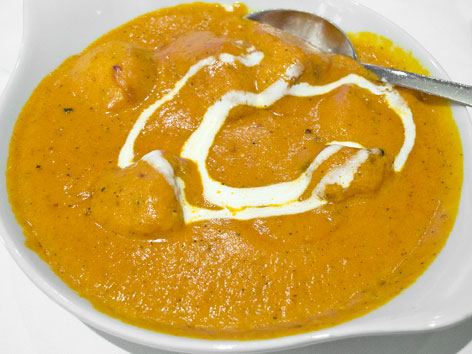 It may seem a bit odd that Britain has claimed chicken tikka masala, that Indian-restaurant standby, as a national dish, but its case is strong: Surveys have shown the creamy, subtly spiced curry to be the U.K.'s most popular dish; the packaged/jarred supermarket versions have been exported to South Asia, including India, for years; and claims abound of its invention here. As the most-cited origin story tells it, a Bangladeshi chef in Glasgow—in the 1960s or ’70s, well after large-scale immigration from South Asia kicked in—decided to appease a local customer requesting gravy with his chicken tikka (boneless chicken marinated in yogurt and spices) by adding a mild tomato-cream sauce to it, and the dish took off. (This story has since been accepted as fabricated.)

However, while the words chicken tikka masala are largely absent from menus in India, the dish would seem to have a very Indian ancestor: the rich Mughlai-Punjabi dish butter chicken, a popular curry in North India. (Clearly the Brits weren’t the only ones who liked a creamy gravy—India’s Mughal emperors were long into that.) So is CTM an accidental evolution of something like butter chicken, eventually “westernized” to suit British tastes? The dish’s question of origin is not without controversy.

Either way, chicken tikka masala remains distinctly popular in the U.K., despite British palates having grown more refined and interested in seeking out more authentically South Asian fare over the years. In London, a city with an East End street dedicated to curries in general (Brick Lane, aka curry mile), CTM is a staple on the menu of hundreds of curry houses. Time to get yourself a hot steaming bowl of Anglo-Indian history.

Good to know: Lest you think “curry” requires the inclusion of curry leaves or curry powder, it doesn’t. It’s just a generic term for a meat or vegetable served in a spiced gravy.

Where: This dish varies wildly across the city. In the hopes of finding a typical take on this, we wandered into our own local curry house, near Russell Square: Hason Raja (+44 20 7242 4888; 84 Southampton Row, map), a white-tableclothed restaurant named for a Bangladeshi poet.

Order: The rich “murg tikka masala” (£9.95) was of good quality, but proved too sweet for our tastes, likely because butter and honey were added to the usual cream and tomato in the gravy. It’s rightfully marked as mild on the menu. We also tried the lamb rogan josh (£9.95), a classic curry of lamb, onion, and tomato, but found it lacking in spice. The naan was fresh and delicious.

Note: Unfortunately, we’ve yet to hear a trustworthy rave review of any curry house on Brick Lane, but if you go there, at least you’ll know you’re getting an only-in-London kind of experience (watch out for upcharges!). If you have a favorite spot, please share in the comment fields below!

Alternatively: Interestingly, we tried some of the chicken tikka masala from a deli counter in the famed food halls of Harrod’s (87-135 Brompton Rd., map) in Knightsbridge, and have to admit it was pretty good, made with yogurt, tomato, cream, nuts, and a bit of spice—it tasted how we know and expect a well-made CTM to taste. We also much preferred the flavor of Tayyabs' (83-89 Fieldgate St., Whitehall, map) chicken tikka masala, but it’s not exactly typical: The restaurant is Punjabi/Pakistani and the dish less saucy and less creamy, with tender chicken and caramelized onions.

Finally, if you want to explore what might be the ultimate bridge between England and India on this particular culinary matter, you might consider the pricey but respected Moti Mahal (45 Great Queen St., map) in Covent Garden: It’s the London branch of a Delhi restaurant group—the same, in fact, that claims relation to the Punjabi man who invented chicken tikka masala’s precursor sometime after partition in 1947. Which means you don’t order CTM here, you order murgh makhani, or butter chicken. Taste the difference!

Ed's note: We go into more depth on this topic over on the blog. See: The 6 Best Indian Restaurants in London.