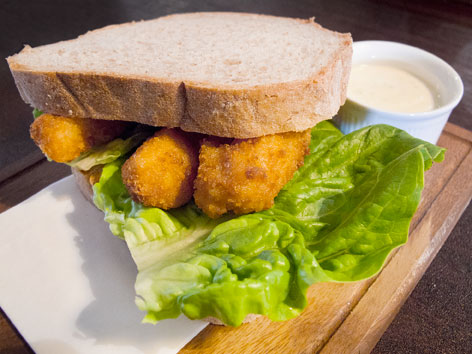 What: As we’ve seen with the bacon butty, the Brits love their sandwiches, especially when they’re filled with what might be considered child-friendly comfort food, like chips or fish fingers. This sandwich is a classic in pubs, and a quick, cheap lunch for office workers; even popular chefs sing its praises—and it’s literally just fried fish sticks between bread, with your spread of choice (such as tartar sauce, HP, ketchup, mayo) and maybe a piece of lettuce. We can’t attest to its origins, but can only imagine it was invented by a clever young chap left to his own devices in the kitchen one day while his parents were out.

Where: Our fish finger sandwich came from a pub called The Clarence (53 Whitehall, map), conveniently located between Parliament and Trafalgar Square. Unfortunately, since our last visit we have been told the sandwich is no longer offered; see “Alternatively” for more places to try it.

Order: This FFS (£6) consisted of three breaded, fried fish sticks and a large piece of green-leaf lettuce sandwiched between two slices of soft brown bread, with a side of tartar sauce.

Alternatively: Try your local pub or any restaurant that proudly serves British food, like The Gun (27 Coldharbour, map) in East London’s Docklands area, where the fish fingers are homemade. This dish sometimes shows up as a retro snack in more unexpected places too, like cozy diner-DJ club The Social (5 Little Portland St., map) in Fitzrovia. For a posh take, consider Pardoe & Wood (two locations including 38 Houndsditch, Aldgate, map), where sea salt crisps (a.k.a. potato chips) are added to the farmhouse-bread sandwich, along with mayo and homemade tartar sauce. Dieters might consider the crunchy baked wrap version at local chain Leon (multiple locations including 275 Regent St., map), which uses sustainable cod.