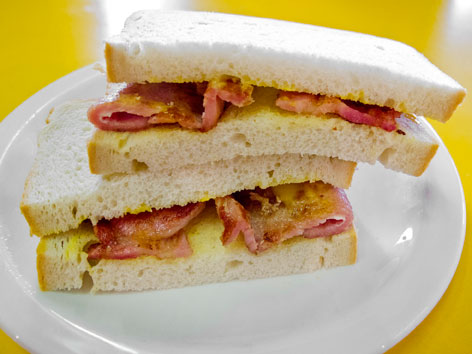 Bacon butty, bacon bap, bacon roll—whatever it may be called, this is, quite simply, a bacon sandwich. Just bacon on some variation of white bread. Sure, it’s usually nice, thick, meaty back bacon. And you can toast the bread, or get it on a large roll (technically it’s then a “bap”), and add some English mustard, HP sauce, or ketchup to it, but let’s just be honest about the fact that this quintessential British dish—a favorite on-the-go budget breakfast among many a London office worker—is a bacon sandwich. Of course it’s good!

Good to know: Another famous butty, generally attributed to Liverpool, is the chip butty. Yep, that is a chip—aka french fry—sandwich. See also: fish finger sandwich

Where: We got our British bacon butty in the spirit of said office worker, meaning at a random deli around the corner from where we were living, just at the Russell Square Tube station entrance. It was a friendly place called Bar Centrale, though it's unfortunately shuttered since our visit. Please see alternative spots below.

Order: A bacon sandwich (£2.20), which is also available on a round roll. Add an egg and cheese for a bit extra. Also on offer here are other standard Brit breakfasts, including cheap fry-ups and beans on toast, as well as a slew of lunch-menu baps, panini, toasted sandwiches, and baguette sandwiches.

Alternatively: This is not a dish you travel far for; any old cafe or deli around you will likely offer it, as will any good breakfast joint. For (almost) all-day breakfast/brunch, including bacon butties, you can try The Breakfast Club (multiple locations including 31 Camden Passage in Angel, map), a retro diner mini-chain that serves most breakkies from 9am-5pm.

It seems in recent years, more of the posh restaurants are offering this too. At The Wolseley (160 Piccadilly, map), you can try a more upscale (and pricey) “crispy bacon roll” in fancy surrounds, served all day, and Dean Street Townhouse (69-71 Dean St., map) has a twice-cooked bacon butty on the breakfast menu too. You know that a bacon sandwich at Spitalfields’ St. John Bread & Wine (94-96 Commercial St., map) is going to be good, when it's offered. Or, for an interesting Anglo-Indian take, consider the bacon naan roll at Bombay cafe Dishoom (12 Upper St. Martin’s Ln, map) in Covent Garden.