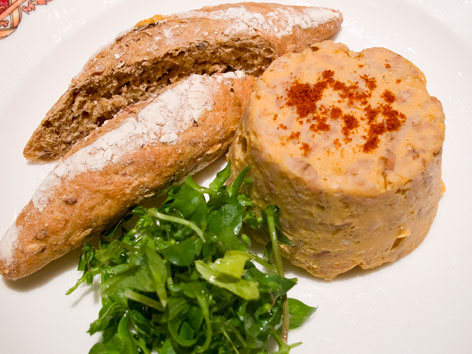 What: Technically, it’s from Lancashire—which is, well, pretty far north and west of London. But this dish is such an English classic as to be considered a heritage dish by the British Food Trust, and it’s long played a role in the restaurants of the country’s capital. Potted foods in general date to the 16th century, when people realized they could preserve fish and meat by placing them in small pots, covering them in melted clarified butter, and allowing it to set, effectively sealing out air and preventing bacteria growth.

Potted shrimps specifically are small, sweet brown shrimp—most famously caught in Lancashire’s Morecambe Bay—peeled and boiled (in seawater, traditionally), mixed with hot spiced butter, then potted and topped with a layer of butter, and finally cooled. Mace, or nutmeg, is typically the dominant spice, though white pepper, lemon, and cayenne are often present too. For serving, the shrimp are dumped out of their pot and usually served cold with hot toast, as a starter or during tea time. Although we’re unused to eating cold buttery shrimp, we enjoyed the historic novelty of this dish—and found it pretty tasty, too.

Where: The granddaddy of real-deal British eateries in London, Rules (35 Maiden Ln, map) is the city’s oldest restaurant, established in 1798. With a focus on traditional cookery, game, puddings, and pies, it’s no wonder it feels like a mix of lived-in hunting lodge and gilded dining hall, all antique mirrors, portraits, chandeliers, and mounted deer heads. Smack-dab in the middle of Covent Garden, it’s the kind of upscale touristy place that locals love, both for its clubby upstairs bar and excellent food.

Order: Of the many things to try here, potted shrimps (£13.95) should be high on your list. The shrimp, from Morecambe Bay, are coated in an extra-rich mixture of prawn butter cooked with garlic, ginger, and shallots; lemon, mace, white pepper, and a bit of cayenne are also cited as ingredients. The cold mound is topped with paprika for serving, alongside some greens and toasted bread. It’s like a sweet, smooth, buttery, shrimpy spread—a lovely appetizer for a heavier, oh-so-British main course, like steak and kidney pudding.

Alternatively: Find this dish at a range of upscale seafood-focused restaurants—like J. Sheekey (28-34 Martin’s Court, map) in the West End, where the potted shrimps are made with anchovy essence—as well as traditional no-nonsense fish institutions, like weekdays-only Sweetings (39 Queen Victoria St., map) in the City. A handful of gastropubs are also paying homage to this classic; while we were in town, we saw it on the menu at the acclaimed, always-busy Anchor & Hope (020-7928-9898; 36 Waterloo Rd., map) in Waterloo.