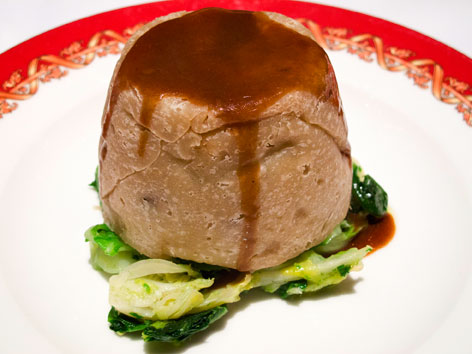 What: Diced steak, onion, and kidney—generally lamb or pig kidneys—in gravy is among the most common of fillings in Britain for meat pies and savory puddings, the latter of which are wrapped in suet pastry and steamed. In fact, it’s considered one of Britain’s national dishes, although it’s been around for only about 200 years (and not until around 1861 with the inclusion of kidneys, according to The Oxford Companion to Food). Filling, hearty, and deeply flavorful—to really dig this, you should probably enjoy the distinctive earthy tang of kidneys—it’s carnivorous comfort food in a neat little package. (We’re especially fond of the pudding, pictured, for its more delicate suet shell.)

Where: Not only does it rank in the top tier of London’s traditional British eateries, but Rules (35 Maiden Ln, map) also happens to be the city’s oldest restaurant, established in Covent Garden in 1798. With a focus on old-school cookery, game, puddings, and pies, it’s no wonder it feels like a mix of lived-in hunting lodge and gilded dining hall, all antique mirrors, portraits, chandeliers, and mounted deer heads. It’s the kind of upscale touristy place that locals love, both for its clubby upstairs bar and high-quality traditional food.

Order: We went for the steak and kidney pudding (£17.95), served atop a bed of cooked greens with gravy on the side (pungent English mustard was offered too). Slicing the pudding open revealed a mess of tender steak and dark kidney, cut into chunks. It’s quite the mountain of meat. Also nice here are the old-school potted shrimps and trifle, among many other traditional dishes.

Alternatively: You’ll find both the pie and the pudding at historic Simpson’s-in-the-Strand (100 Strand, map), while it’s the pie that is award-winning (and less than £10) at The Windmill (6/8 Mill St., map) in Mayfair. Famous St. John (26 St. John St., map), in Clerkenwell, does a beef and kidney pie for two, for £36. And although we don’t make it a habit to encourage eating at tourist-attraction historic pubs, the steak and kidney pie served upstairs at gloomily lit Ye Olde Cheshire Cheese (020-7353-6170; 145 Fleet St., map) is rumored to be good. The pub, all nooks and crannies and teeny narrow stairways, is worth a visit for its back-in-time atmosphere alone: It was rebuilt in 1667 following the Great Fire and is famed for counting Charles Dickens among its many literary patrons.