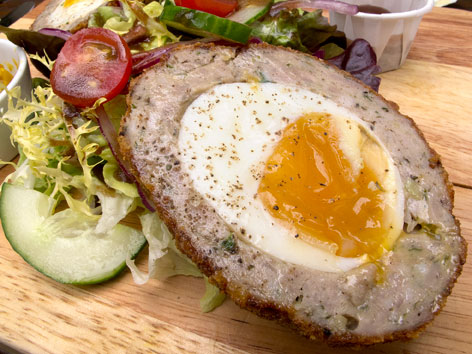 In what might be the most brilliant bar snack of all time, a Scotch egg is a shelled hard-boiled egg wrapped in sausage and covered in breadcrumbs, then deep-fried to crispy perfection. The oversize egg-on-steroids that results is commonly served cold, with green salad and, we hope, a beer.

Despite its name, the Scotch egg has two primary competing origin stories, neither of them anything to do with Scotland: It was either invented by London’s venerable department store Fortnum & Mason in 1738, as portable sustenance for well-heeled travelers on long carriage rides, or (more likely) it evolved from northern India’s nargisi kofta, a rich Mughlai dish that pairs minced-meat-covered eggs with curry (see kofta in Delhi). For some reason the dish fell out of fashion for a while and only recently made its eggy, meaty comeback in the Brit-food-embracing gastropubs of London. Thank goodness.

Where: Our Scotch egg is from The Carpenter’s Arms (73 Cheshire St., map), a handsome, refurbished pub in Shoreditch with a local-gangster history and a sweet little outdoor heated garden.

Order: The homemade Scotch egg (£6), served cold with a leafy salad and side of piccalilli (a tangy, mustardy mix of chopped vegetables), is often on the menu here. The yolk was delightfully soft and the sausage clearly of good quality, with a perfectly crisp outer. Sunday lunch is a great time to come, for the excellent roast lunch.