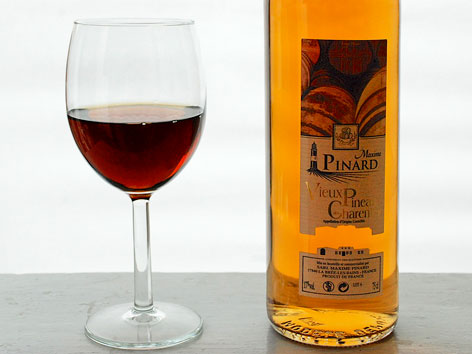 What: Pineau des Charentes (or simply pineau) is a fortified wine made from lightly fermented grapes, fresh grape must, and cognac. The common belief is that pineau was invented by accident in 1589, the year of Henry IV’s coronation, when a winemaker mistakenly added grape must to a barrel partially filled with brandy. He returned several years later to discover a new drink, and for a long time after that, pineau was kept as a kind of local secret—bottles were stored away and saved for special occasions. Pineau producers are typically responsible for the entire process of making pineau: They grow and pick the grapes, they make the wine and cognac, and then they blend the two for maturation. The quality of a given pineau depends less on the properties of the wine, and more on the excellence of the eau-de-vie with which it’s blended. Each bottle of pineau is aged at least one year, always in oak barrels, although some is aged longer: Vieux (old) is aged five years, and très vieux (very old) is aged 10. You can find pineau in white, red, and rosé varieties, all containing between 16% and 22% alcohol. Drink pineau on its own, chilled as an aperitif, or as an accompaniment to dessert; it also makes a winning cocktail ingredient (read: take a bottle home if you can!). In Charente-Maritime, pineau is often added to meat, fish, and shellfish dishes for added depth and flavor.

Where: On Île d’Oléron, make sure to visit pineau producers Maxime Pinard (multiple locations including Les Alletières, Brée les Bains). The Pinard family has been making top-quality pineau on this land since 1889, and it’s a family operation through and through: Maxime makes the pineau, while his wife runs the showroom. Their young daughters even help drive the tractor and pick the grapes!

Good to know: Maxime Pinard products are also sold at other locations around the island, see map here.

When: The main location is open for tastings (and shopping) daily, 10am-12:30pm and 3pm-7pm, as well as hour-long vineyard tours every Friday at 3pm (€2 per person, includes a tasting of all their products: pineau, cognac, fruit liquor, vodka, and wine).

Order: Tastings of their basic red and white pineau are free at the showroom; if you like what you taste, take a bottle of red or white pineau home with you (€9,60 per one-liter bottle). You’ll also find vieux (aged) pineau available here (€15,60), Maxime Pinard’s own white wine (€4,30 per bottle), red and rosé wines (€3,50 per bottle), as well as housemade “cognac beer” (€10 for a three-pack). Other local products sold here include Île d’Oléron butter cookies, salted caramels, and sea salt.

Alternatively: In La Rochelle, wedged between the restaurants that line the periphery of the old port, Ph. Godard (33-6-27-37-09-66; 44 Cours des Dames, map) is a one-stop shop for all your local liquor needs. Here you’ll find a variety of pineau and cognac (which originates in Cognac, just 65 miles (105 km) southeast of here) as well as a vast collection of other fruit-based liquors.

If it’s just a glass of pineau (or three) that you’re after, you’ll have no trouble finding it on the menu at bars and restaurants around the Charente-Maritime region. Keep in mind that pineau is particularly popular as an aperitif, a drink enjoyed before dinner. One place we like in La Rochelle is Bar du France 1 (05-16-85-27-72; Musée Maritime, map), a restaurant/bar on a boat.

Good to know: You can also try pineau in one of several food applications. Melon au pineau is served as a starter: A halved, seeded cantaloupe is filled with pineau and eaten with a spoon. Moules au pineau, or mussels cooked with pineau, is a common mussel preparation in Charente-Maritime (see also: local mussels). For something more substantial, keep an eye out for lapin à la saintongeaise, a kind of rabbit stew cooked with shallots, garlic, thyme, bay leaf, and rosé pineau.