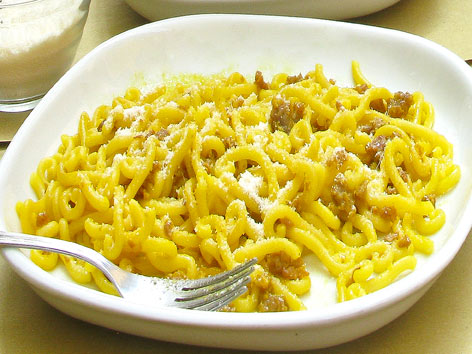 What: One of Bologna’s many famed egg pastas, gramigna (“little weeds”) is short, curly, and most often paired with a hearty pork-sausage sauce. Like many of the area’s dishes, the secret to its deliciousness is its simplicity.

Where: We had our gramigna, which was made with saffron, at Il Cantinone (Via del Pratello 56/a), a rustic osteria on a lively street in Bologna with sidewalk seating.

Alternatively: This dish is quite common on primi piatti menus around Bologna, including those at Ristorante da Nello al Montegrappa (Via Montegrappa 2, map), where mushrooms join the party, and Trattoria del Rosso (Via Augusto Righi 30, map).