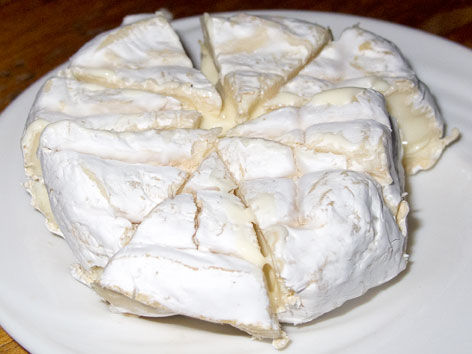 What: Chances are, you’ve already had your fair share of Dutch cheese: The Netherlands has long ranked among the top exporters of cheese in the world, with Gouda accounting for more than half of the country’s production. (Edam, spherical and wax-wrapped, is the second most produced; like Gouda, it dates to the Middle Ages and is named for a specific location in the Netherlands.) Gouda is certainly found all over the capital—one cheese monger went so far as to inform us that “everything is Gouda” and “no one eats Edam anymore”—though there are so many varieties of it you’ll hardly ever see something simply called “Gouda” (see note below). Aside from those two big players, there are countless other Dutch cheeses, from the simply named boerenkaas, an unpasteurized “farmer cheese,” and friese nagelkaas, made with cloves and caraway (from Friesland), to Swiss-style Maasdammer and Leidse kaas, a cumin cheese from Leiden. For this entry, we’re focusing primarily on Gouda and Amsterdam’s über-local sheep’s cheese, Skeapsrond.

Good to know about Gouda: Generally speaking, Gouda is a mild, semi-hard, pasteurized cow’s-milk cheese. Yet it’s much more than that, as one peek inside a shop crowded with giant wheels of cheese will quickly tell you. First thing to know is that the cheese is labeled by its age: graskaas (the youngest; aged less than four weeks), jonge kaas (“young cheese”; aged four weeks), jong belegen kaas (“semi-mature”; aged eight to 10 weeks), belegen (“mature”; aged about four months), extra belegen (“extra mature”; aged seven to eight months), oude kaas (“old cheese”; aged 10 to 12 months), and overjarig (the oldest; aged one to two years). The second thing to know is, in general, the younger the cheese, the creamier the texture and milder the taste—these cheeses gain a sharper, nuttier taste and crumblier, more crystalline texture as they get older (read: awesomer). Finally, to confuse matters further, there’s goat (geiten) Gouda, raw-milk (rauwe melk) Gouda, and tons of different herbs and flavor add-ins to consider, such as fenugreek, mustard seeds, cumin, cloves, red chiles, pesto, sambal, and more.

Where: Good Gouda is a dime a dozen in the city, but we know of only one place where you can get perhaps the most local cheese of all: Skeapsrond, a soft organic sheep’s cheese from Dikhoeve farm in Ransdorp, about 10 km outside Amsterdam. Find it at the excellent Brouwerij ’t IJ (Funenkade 7), our favorite Amsterdam brewery situated under a windmill (see also: local craft beer). Why does the brewery sell it? Aside from the cheese being a beautiful beer snack, the sheep that provide the milk for it are fed on the brewery’s malt dregs left over from beer making (a farmhouse synergy reminiscent of Parma’s prosciutto pigs fed on Parmigiano-Reggiano whey).

When: The brewery’s tasting room is open daily, 2pm-8pm.

Order: Sold in €5 rounds, the Skeapsrond is comparable to Camembert: very creamy and strong in taste, with an edible rind. We didn’t see any bread offered at the brewery, but we didn’t miss it either—this cheese disappeared very quickly at our table. Pair it with a plate of salami or ossenworst, and certainly a house-brewed beer (or two).

Alternatively: Among the city’s well-known, head-spinning cheese shops are De Kaaskamer (Runstraat 7, map) in the Jordaan and L’Amuse (Olympiaplein 111, map) in Oud Zuid, with some 400 cheeses from around the world. At Reypenaer Proeflokaal (Singel 182, map) you can taste the offerings of family-owned brand Reypenaer, which produces traditional artisanal cheeses in Woerden, some 40 km away (reservations recommended). There are also excellent cheese mongers at the city’s markets, including Albert Cuypmarkt (map) and the Saturday Boerenmarkt (farmers market) at Noordermarkt (Noorderkerkplein, map). Heck, most corner stores and cafés have decent selections too—let’s just say good cheese isn’t hard to find here. When in doubt, just point, buy, and eat: You’ll probably love it. (See also: broodjes, broodje kaas)