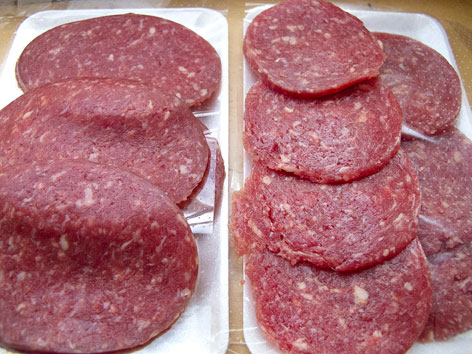 What: Its name refers to oxen, from which this smoked Amsterdam sausage was originally made back in the 17th century, likely in the Jewish kosher tradition. Nowadays it’s typically beef and spices—salt, pepper, cloves, nutmeg, mace—in beef casing, very lightly smoked so that it’s nearly raw when consumed. Like steak tartare, it’s quite soft and tender on the tongue, a texture that may take some getting used to, but you’ll soon happily be pairing it with beer, cheese plates, and bread (it’s popular in broodjes, or sandwiches).

Where: You can buy ossenworst in a tube from just about any food store, but we prefer to get it fresh from the butcher. An insider tip led us to T.F.M. Louman (Goudsbloemstraat 76), a famed butcher in Jordaan since 1890 that gets wonderfully cramped on Saturday mornings.

Order: Like other butchers, Louman sells ossenworst smoked (gerookt) and unsmoked, or raw; we bought about four euros’ worth of them combined (they are €17,50 and €16,50 per kilogram, respectively). We preferred the smoked variety, as it’s more flavorful and is the more traditional of the two. This butcher has some other delicious sausages on offer; definitely explore what’s behind the counter!

Alternatively: Try your neighborhood butcher, or get your ossenworst in a broodje at locally beloved Frank’s Smoke House (Wittenburgergracht 303, map), where organic meat is used, or Eetsalon Van Dobben (two locations including Korte Reguliersdwarsstraat 5-7-9, map). At the excellent Brouwerij ’t IJ (Funenkade 7, map), you can get a nice €5 plate of ossenworst to go with your housemade beer (and delicious local sheep’s cheese, Skeapsrond); see also: local craft beer.