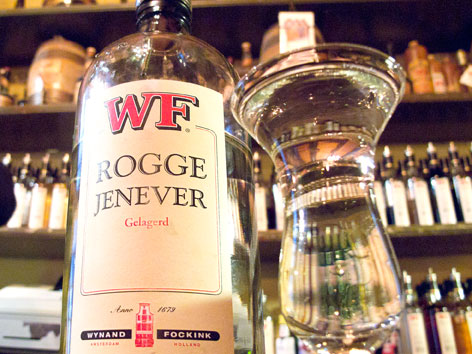 What: Don’t think of it as “Dutch gin”—that’s an all-too-common misconception. Jenever, also spelled genever (pronounced “juh-nay-ver”), did, a century later, spawn the development of English gin as we know it, but it’s a completely unique alcoholic beverage, distilled in a different manner and—despite both spirits being infused with juniper berries—having a different flavor profile (most jenever does not pair well with tonic, for instance). It dates to the 17th century, when a Dutch physician is said to have added juniper to distilled grain spirits for medicinal purposes, calling it genièvre (French for “juniper”; jenever is the Dutch word). Not surprisingly, it wasn’t long before the concoction caught on for non-medicinal use, eventually gaining popularity around Europe and the U.S. until it was overtaken by English-style gin.

Unlike gin, which is distilled from a high-proof neutral spirit and then flavored with juniper and other botanicals, jenever traditionally starts with a base of malt wine, a strongly flavored, low-proof distillate of malted grains—generally a mash of rye, wheat, and corn, much like what would be used to make whiskey—that imparts a distinctly malty taste and subtle sweetness. It’s triple-distilled in copper pot stills, nowadays using mixed percentages of malt wine and neutral grain spirits, and then flavored with juniper berries and a host of other botanicals and spices. (As the jenever-versus-gin story goes, the latter was developed in England by inexperienced distillers who could never really nail the malt wine part, so they simply omitted it.)

Although the rest of the world now knows gin far better, jenever has never stopped being popular in the Netherlands and surrounding areas. In 2007 the spirit was granted AOC status (controlled designation of origin) by the European Union, restricting production (in name) to the Netherlands, Belgium, and some tiny parts of France and Germany. In Amsterdam, jenever is so ingrained in the local drinking culture it’s on nearly every café’s menu—but the city’s ancient distillers are the best places to try it.

Where: Down a small alley near Dam Square, distiller Wynand Fockink, in operation since 1679, has a quaint, wooden-floored tasting room, Proeflokaal Wynand Fockink (Pijlsteeg 31 & 43), where you can try a wide variety of jenevers and traditional liqueurs.

When: The tasting room is open daily, 3pm-9pm. English-speaking tours (45 minutes) are offered on Saturdays at 12:30pm. For an organized tasting session or workshop, contact the distillery.

Order: You can ask to sample from any of the 70-odd bottles here, although most of them are traditional fruit liqueurs with funny names and pointed descriptions (Bittere Lijdenstroost, or “Bitter Consolation,” a mix of bitters, vanilla, cinnamon, and orange peelings, is “a match for any kind of sorrow: two glasses of this liqueur and all problems, small or large, have vanished forever”). Of the jenevers, there’s rogge, or rye-based (pictured), spelt-based, jonge (young), oude (old), “Superior,” aged three years, and korenwijn, or “corn wine” jenever. (An important distinction to note: Old jenever isn’t necessarily aged but is produced in the “old” style, requiring at least 15% malt wine, and is therefore more complex; young jenever follows a more recent recipe, using less malt wine and containing less alcohol. Korenwijn is cask-aged and contains the most malt wine, at least 51%.)

Common descriptors of jenever are malty, sweet, and smooth, but the stuff takes some getting used to—we ultimately preferred the aged Superior for its mellower, more whiskey-like taste. It’s heady, warming, and well chased by a short beer (in a combination called kopstoot, or “head butt”). As per tradition, you have to take your first sip the Dutch way: by stooping over the bar and lowering your mouth onto the overfilled, tulip-shaped glass. Only then can you pick up the glass.

Alternatively: The other historic distiller in town, Jordaan-based A. van Wees distillery de Ooievaar—which has been in operation since 1782 and produces 17 different jenevers—has a tasting room called De Admiraal (Herengracht 319, map), open 4pm-midnight Mondays through Saturdays. If you can’t visit a distillery, and we recommend you do, look for jenevers on the menu at any good brown café, like Café Onder de Ooievaar (Utrechtsestraat 119, map), which carries van Wees.