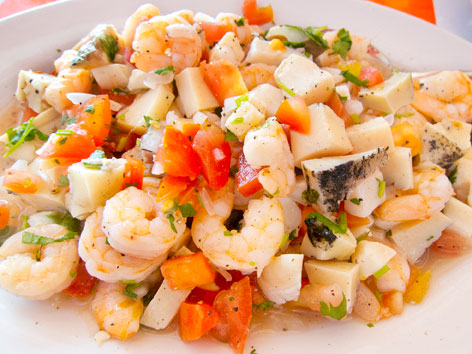 What: You cannot visit the so-called Riviera Maya without eating super fresh ceviche with your feet in the sand—or you shouldn’t, at least. It’s common to see camarón (shrimp), pulpo (octopus), caracol (conch), and pescado (fish) prepared as ceviche, marinated and “cooked” in little more than lime juice and mixed with onions, tomato, chiles, and cilantro for serving. Ceviche has long been a culinary tradition in this part of Mexico, with its access to the abundant sea. While the sight of it on countless restaurant menus certainly raises sustainability issues (see note below), this dish remains a culinary must here—little else will remind you so pleasantly of where you are in the world.

Good to know: Overfishing has taken its toll on aquatic populations, particularly certain fish species (like grouper) and conch, which is overharvested just about everywhere (see also: conch, Florida Keys). Queen conch fishing gets restricted or banned off Quintana Roo from time to time, but the shellfish still seems to be on nearly all seafood restaurant menus in Isla Mujeres and beyond, likely shipped in frozen from elsewhere. Feel free to ask to hold the caracol in ceviche mixto, or at least limit your consumption of the critters while you’re here.

Where: On Isla Mujeres we found Cockteleria Justica Social (Av. Medina, south of ferry terminal, map) via Holly Eats, and it was by far the best ceviche we tried in the area—not surprising considering it’s owned by a local fishermen’s collective, so you know its seafood is local and muy fresco. The place has a nice, low-key vibe to it, less touristy than other cocktelerias nearer the island’s north end, and the back has a covered outdoor area on the water, where small boats bob in the breeze.

Order: Pictured is the excellent ceviche mixto (100p/medium), combining lime-marinated shrimp, octopus, and caracol tomburro, a black-skinned sea snail (not in the true conch family, but similar), with the wonderfully juicy trinity of tomato, onion, and cilantro. The snail is a bit chewier than the delicate shrimp and tender octopus, adding varied texture, and the flavors were incredibly bright and fresh—citrus meets the sea. Pair it with a seafood cóctel (cocktail)—we liked the shrimp—and a refreshing chelada and you won’t want to leave.

Alternatively: Further north on Isla Mujeres is the well-regarded Picus and Minino’s (both on Av. Medina, approx. map), popular next-door spots on the water doing a brisk trade in ceviches and cócteles (pictured here). In Playa del Carmen, Los Aguachiles (multiple locations including Calle 34 Norte & Av. 25, map) is a good bet; there’s a Los Aguachiles in Tulum as well, but our money there is on El Camello Jr. (984-138-5139; Av. Tulum near Av. Kukulcan & Palenque, map) next door, an always-crowded local favorite on the western edge of downtown Tulum.