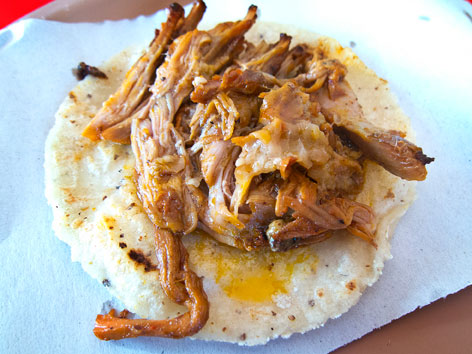 What: One of the few Yucatecan dishes you may encounter outside the Yucatán, even abroad, is cochinita pibil, a marinated, pit-roasted pork dish that’s like the best pulled pork you’ve ever had, served with tortillas or tucked into a taco or torta (or even a burrito, sometimes). The marinade, similar to that for tikinxic and poc chuc, is key: sour orange juice and achiote paste (made from grinding annatto seeds with spices like black pepper, cinnamon, cumin, and cloves), some garlic, and not much else. After the pork—traditionally a whole suckling pig (cochinita = baby pig; pibil = buried)—has marinated long enough, it’s wrapped in banana leaves and slow-roasted atop hot stones in a pit dug into the ground. The acidic marinade coupled with the slow cooking produces a tender, juicy final product, served with pickled red onions, that quite literally melts in your mouth. It’s no surprise this dish is beloved by so many.

Good to know: Traditionally, cochinita pibil is a Sunday-morning dish, but it’s not too hard to find it most days of the week around here.

Where: In Tulum pueblo—a seven-minute drive from the beach and its zona hotelera—there are a few excellent taquerias, one of which is El Paisa (Av. Satelite Sur & Sol, map). Here the cochinita pibil comes from an inland village and is driven in daily every morning, as it’s common breakfast fare around here. Tortillas are handmade and served hot.

Order: Get the cochinita pibil in a taco (10p), piled atop one of those beautifully thick and sturdy tortillas, or try it as a torta (20p), sandwiched into a fluffy white bolillo roll—you won’t go wrong either way. The fall-apart meat is wonderfully tender and richly flavorful, earthy and oily enough with fat to coat a piece of bread in a nice orange sheen. Also consider the bubbling pots of pollo en relleno negro and escabeche de pollo here.

Alternatively: Just across the street from El Paisa in Tulum, Taqueria Honorio (Sol & Av. Satelite Sur, map) is another great bet for cochinita pibil tacos and tortas, as well as excellent lechon and relleno negro, and down the street, we like Taqueria Don Beto (985-101-0163; Av. Tulum opposite the road to the ruins, map). Up in Isla Mujeres, we’d follow the advice of Holly Eats and hit up the Sunday market in Colonia La Gloria, in the south-central of the island, where the pork is served by weight, to go. In Playa del Carmen, you might try it as a (pricey) plate at Yaxche (5th Ave. & 22nd St., map), or the fancy sous vide-cooked version at Luna Maya (5th Ave. & Calle 38 Mezzanine, map).