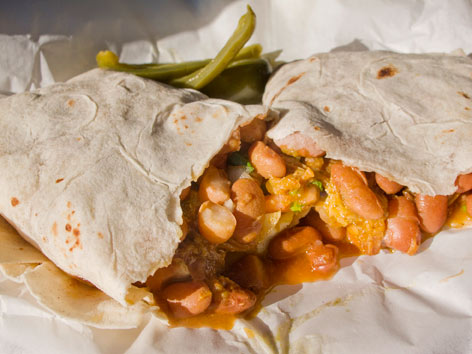 What: Los Angeles is primarily a taco town, but it has some great burritos. Yep, we said it. You hear that, San Diego and San Francisco? L.A.’s burrito style is not as distinct as SD’s surfer-friendly “California” burrito or SF’s massively stuffed Mission burrito; in fact, you’ll find a variety of burritos here. But the ones that shine brightest tend to be those that fall in line with the city’s wonderful regional-Mexican tendencies: burritos stuffed with Yucatecan cochinita pibil, Pueblan chile relleno, D.F.-style al pastor. Of course, you wouldn’t eat those foods wrapped in a tortilla south of the border, but here, it just works. And it’s very L.A.

Where: Occupying a tiny corner of Los Feliz since 1976, Yuca’s (multiple locations including the original at 2056 Hillhurst Ave., map) is an absolute must for any burrito lover in L.A. Scratch that: It’s an absolute must, period. And we’re far from the only ones who think so: It’s won all kinds of awards, the most distinguished being the James Beard America’s Classics in 2005, which honors small and beloved locally owned establishments serving quality food. Not bad for a shacklike, family-run taqueria with outdoor parking-lot seating. (Note that there is a second branch, Yuca’s on Hollywood, with a larger menu that includes breakfast burritos.)

Order: The super flavorful cochinita pibil burrito ($6.85)—a simple affair filled with Yucatán-style slow-cooked marinated pork, pinto beans (cooked in pork lard), and a fresh tomato-onion-cilantro salsa, served with pickled jalapeños—is perhaps our favorite thing in this city. Wrapped in an elegant, lightly grilled flour tortilla, the piping-hot pork and beans unabashedly spills out when cut into (a fork and knife is good precaution against burning your mouth or—worse!—losing some filling). It’s not giant, but the price is right—and the mess of tender meat, salty beans, and crackly-crispy tortilla is enormously satisfying. We think the Mayans would approve.

Also popular here are the carne asada (grilled beef), machaca (shredded beef), and carnitas (shredded roast pork) burritos and tacos. We imagine the tortas, offered with the same meats, would be worth a try. And the good people at Serious Eats tout its classic, thin-patty cheeseburgers.