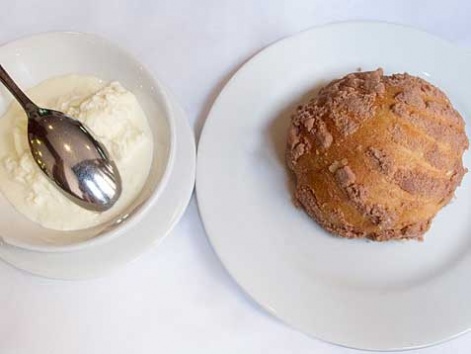 What: Conchas are round sweet pastry breads baked with a sugary crust evoking the pattern of a seashell (hence the name, literally “conch”), prepared early in the morning. They’re usually flavored vanilla or chocolate. Nata is essentially clotted cream, the layer of fat skimmed from milk when it’s boiled and cooled. Mexicans swoon for these two breakfast items together, though they’re often more a precursor to a bigger breakfast—a breakfast appetizer of sorts.

Where: In el Centro Histórico, Restaurante El Cardenal (multiple locations including Palma 23, map), occupying three floors of a French-style mansion, is justly famed for its breakfast, which must always kick off with a selection or two from the waiter’s tray of just-baked sweet breads.

When: Mon-Sat, 8am-7pm; Sun, 9am-6pm. Earlier is better for breakfast; make a reservation if you can.

Order: Ask for nata (50p) as soon as you can, then choose a fresh concha from the waiter’s tray (18p each). As a dip or spread, the nata adds a delicious creaminess to the soft, lightly sweet bread (these conchas are rather gently sugar-coated compared to some others we tried). Wash it all down with a cup of the restaurant’s frothy hot chocolate.

Good to know: Among the breakfast items here, we loved the omelet stuffed with huatzontle (a green herb with broccoli-like florets) and the huevos ahogados, a clay pot of soupy black beans with poached eggs, chile, onion, and hunks of cheese; we hear the chilaquiles are great here too. El Cardenal is also a good place to sample some of Mexico City’s pre-Hispanic delicacies: escamoles, or ant larvae, poppy little light-colored eggs prepared here in a tortilla de huevo (Spanish omelet); and the seasonal (June-July only) gusanos de maguey, or worms from the maguey plant—not for the faint of heart, this is served as a plate of red-colored worms with guacamole.

Alternatively: For tasty conchas and other pan dulce minus the nata, hit up the city’s bakeries early in the morning. We liked the soft, sugar-smothered conchas at Pasteleria Maque (55-2454-4662; four locations including Ozuluama 4 in Col. Condesa, map), a chic bakery-café that does a full menu—think omelets, enchiladas, chilaquiles, smoothies—as well as brisk takeout business. At the Condesa location, conchas are offered both off the tray (when seated) and to go, at lower cost; for the latter, it is self-serve, so use the provided trays to select your bread from the display, then pay at the register—and consider bringing your conchas to nearby Parque México.