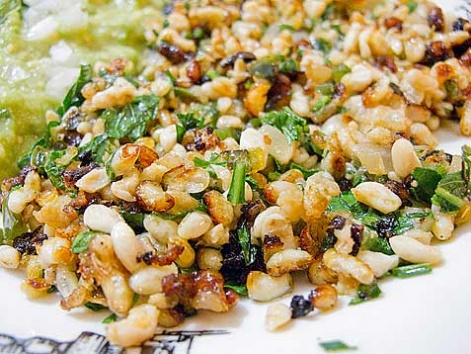 Escamoles, or ant larvae, is a dish native to Central Mexico. It was once considered a delicacy by the Aztecs—insect caviar, if you will (their price today continues to reflect this high-minded status). As far as insect-related pre-Hispanic foods go, this one is better than it sounds. The light-colored ant eggs, harvested from maguey plants, resemble white-corn kernels or pine nuts; they have a poppy texture (more crunchy if fried) and a slightly nutty taste. Often pan-fried with butter and spices, escamoles can be found in tacos and omelets or served alone, accompanied by guacamole and tortillas. It’s indigenous, tasty, and memorable, without the gross-out factor (for those unfamilar to the cuisine) of, say, fried maguey worms, another common pre-Hispanic insect food.

Where: We liked the escamoles on offer at Fonda el Refugio (Liverpool 166, map), a semiformal but homey restaurant in the Zona Rosa known for its wide range of regional Mexican dishes: Think manchamanteles, mole Poblano, huachinango (red snapper) a la Veracuzana. Though generally seasonal (to spring/early summer), escamoles are available year-round here—according to our waiter, the restaurant’s suppliers are able to harvest from different regions.

Order: The escamoles (250p) are a splurge, but they’re very nicely prepared here—pan-fried with butter, cilantro, and chiles; some of them really well-done and crunchy. The generous serving comes with guac and tortillas. We also loved the caldo Tlalpeño, another local specialty, and the potent but small margaritas here.

2018 update: Fonda el Refugio has closed, sadly. Please see our alternative recs for trying escamoles, and comment below if you have another suggestion to add!

Alternatively: In el Centro, you’ll find escamoles on the menu at Los Girasoles (Tacuba 8, map); Fonda Don Chon (55-5542-0873; Regina 160, map), which specializes in pre-Hispanic foods (you might also look for wild boar, rattlesnake, venison with huitlacoche sauce, and deep-fried maguey worms); and Restaurante El Cardenal (three locations including Palma 23, map), where the larvae are served nestled within a Spanish omelet at breakfast. And though it is a mezcalería with a Oaxacan bent, Corazón de Maguey (55-5554-7555; Plaza Jardín Centenario 9-A, Col. Coyoacán, map) offers a seasonal spring menu with lots of insect dishes, including escamoles.